I am 66 years old, and I am about to snap.  Do you even need to ask, “Why?” As I watch our nation engrossed in a debate over the morality of bathroom selection, I cannot recognize the place where I was born, raised, lived my life.

I feel that I’m living in a foreign land, though I haven’t reached the point of weeping (Psalm 137), possibly because I am too angry.  But if the “stages of grief” hold true, it won’t be long before I acquiesce to depression and tears. But I will refuse the final stage, acceptance, and will choose to snap instead.

What form will my snapping take?  One well-known model is the character Howard Beale, played by Peter Finch, from the film “Network” (1976). His rampage still resonates in our cultural memory, “I’m as mad as hell, and I’m not going to take this anymore. . . .”

The continued relevance of Paddy Chayefsky’s screenplay  is uncanny:

Mad prophet is not my style, though watching the elegant Peter Finch devolve into a rain-coated Jeremiah (Jeremiah 33.10-16) has proven, to me anyway, unforgettable.

Another model, perhaps not so therapeutic, is the character, Bill Foster, played by Michael Douglas in “Falling Down” (1993), who “has passed the point of no return. . . .” (The screenplay was written by Ebbe Roe Smith.)

My form of snapping would not be violent, though I understand the rage of man barred from seeing his daughter on her birthday. Mine would  be triggered by an overloaded sensibility under constant assault by our corrupt culture, where the standard of morality has been reduced to an individual’s view of whether biological males, who consider themselves female, can use the ladies bathroom.

I recently had a discussion with a gentleman from North Carolina who considered my support for the “bathroom bill” tantamount to racism. My response was laughter, simple laughter.  This was spontaneous, not pre-meditated.  The absurdity of defending gender specific bathrooms just started me giggling, then came full throated laughter.

Nietzsche’s Zarathustra spoke of the laughter that kills, but my laughter was closer to what the playwright Christopher Fry had in mind in “This Lady’s Not for Burning” (1948).

The main character Thomas Mendip is asked why he said, “For God’s sake, shall we laugh?”

“For the reason of laughter, since laughter is surely
The surest touch of genius in creation.
Would you have thought of it, I ask you,
If you had been making man, stuffing him full
Of such hopping greeds and passions that he has
To blow himself to pieces as often as he
Conveniently can manage it… would it also
Have occurred to you to make him burst himself
With such a phenomenon as cachinnation?
That same laughter, madam, is an irrelevancy
Which almost amounts to a revelation.”

As Fry wrote in his widely anthologized essay on comedy, “Comedy is an escape, not from truth but from despair; a narrow escape into faith.” Comic overcoming, as opposed to Nietzsche’s laughter that kills, requires the kind of faith that transforms tragic circumstances.

When the Jews found themselves tragically ensconced in the “foreign land” of Babylon, they hung their lyres on willow trees. When they were asked by the captors to sing the songs of Zion, they answered, “How can we sing the Lord’s song in a foreign land?” (Psalm 137.4).

Perhaps my impulse to snap is another form of hanging up my lyre, refusing to sing the Lord’s song?  Or perhaps I will snap through the “narrow escape into faith” and find myself laughing and singing on the other side? If laughter can be an “irrelevancy/ Which almost amounts to revelation,” then, I say, bring it on!

Perhaps my laughter in the face of being called a racist was an act of faith. Why try to defend the absurd? Why try reasoning with unreason? It’s like trying to convince Dostoevsky’s Underground Man that 2 + 2 does not equal 5!

Perhaps I have already snapped and didn’t recognize it in the sound of my laughter. 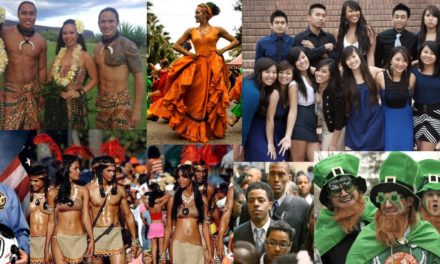 Can Culture Be Whatever?

Starting the Year of Mercy With Confession