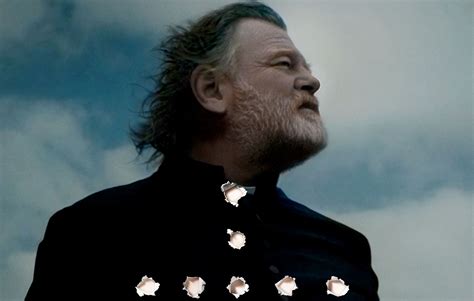 “I think there’s too much talk about sins and not enough about virtues.”

As an incorrigible cinophile and a life-long Catholic, there are few things that fill me with as much trepidation as watching a film about a Catholic priest.

All too often, modern cinema’s tendency to focus on the spectacular successes and failures of recent generations produces cinematic representations that may well be fair to the particular characters of their stories – John Patrick Shanley’s “Doubt” comes to mind – but seem unfairly dismissive and accusatory when speaking of the more ordinary, mundane priests of my own experiences: Men who struggle with far more human and manageable doubts and temptations, and whose ability to overcome those challenges render them no less heroic in my eyes, but far more believable.

All of which provides a bit of background as to why I approached John Michael McDonagh’s “Calvary” with equal parts exhilaration and dread. Recently made available for both rent and purchase, the plot is shockingly simple: In the film’s brutal opening scene – a moment described by critic Steven D. Gredanus as one that “comes like a stinging slap on the face” — Father James Lavelle (played by veteran Irish actor Brendan Gleeson) is told by a shadowy male confessor of the in excruciatingly detailed abuse he suffered at the hands of a now-deceased priest. And then, almost casually, that he intends to murder Father on Sunday week.

When the nonplussed priest presses his future assailant on why he should suffer for the sins of another, the man replies: “There’s no point in killing a bad priest. Killing a good one? That would be a shock! They wouldn’t know what to make of that. I’m going to kill you, Father. I’m going to kill you ’cause you’ve done nothing wrong!”

And that’s it. That’s the premise and the plot, all rolled into one. But don’t let the simplicity fool you. Because while the larger structure is one of that simple, awful threat (and then waiting to see whether or not that threat comes to fruition), it’s what the film does between those two bookends — and, ambiguously, in its final scene — that makes it fascinating. To use a cliché, it is far more about the journey, and those travelers Father meets along the sides of his life’s road, than it is about the destination.

Although Father James suspects that he knows the identity of his impending attacker, he is unsure how to best respond to his predicament. Quickly, he finds himself distracted by the needs of ministering to his tiny flock, he makes little attempt to forestall next Sunday’s confrontation, choosing to focus on his priestly role instead.

Interestingly, the film produces a mirror response in its audience. Our curiosity as to the attacker’s identity is quickly replaced by our fascination at the stream of bizarre and embattled characters that parade across the screen: The aging and irascible American writer who fears not the finality of death so much as he fears its inevitable lack of dignity; the local butcher whose wife’s affair with an Ivorian immigrant is such public knowledge throughout the village that it no longer even produces a response; the almost-impossibly rich, almost-impossibly empty financier who has learned with devastating effectiveness that wealth is no substitute for happiness; the cynical doctor who describes his life as “one part humanism to nine parts gallows humor” and who goes out of his way to be as cruel as possible.

They’re all fascinating and instructive caricatures burdened by a common flaw: They are all sinners whose sins are so obvious and so public that they can no longer see themselves as other than the sum of their transgressions.

All of which serves to highlight the extraordinary thing about Father James. It’s not that he’s a great priest; it’s that he’s a good one – a character that is far less frequently portrayed in the cinematic realm than one might wish – and sadly, far less recognized and appreciated when found in real life, as well. He is a man who sees sin constantly and is not blind to it.

But neither is Father James blinded by its constant presence, refusing to distance himself from the ugly truth of the confessional not because it burdens him, but because he recognizes the need to acknowledge it, and then to see past it. He must look past the distastefulness and ugliness of the sin to the sinner beyond; the man who is in need of his ministering. His own abilities and gifts are limited, yet he still gives himself whole-heartedly to his flock by seeing them as they are, rather than as the sum of their mistakes.

As he prepares to confront his attacker, he recognizes that he has failed to grieve for the many abused because they seemed so distant to him. But this man who he will soon see before him — this man he has fought to help and to save each and every day as a priest and who now holds the power of life and death over him – this man has never been distant. And never will be, no matter how his own story ends.

Fittingly, the film’s final moments carry a heavy dose of ambiguity, requiring from its characters a movement beyond the narrow and conflicting views they have embraced for so long. It is a finale that forces them to respond to Father’s advice and instructions rather than relying on Father’s own actions to alleviate their sufferings.

And so, most fittingly, Father James’ life is measured not so much by the obviousness (or lack) of his own virtues, but by his ability to teach others to recognize and embrace the superhuman path to virtue that lies before them; a path that he fights to walk each and every day, even as they do. Because he, too, is a man; fallen and struggling, as are they. And it is in highlighting that priestly humanity that Calvary finds its greatest power.

“I think forgiveness has been highly underrated.”

Joseph has been doing development work for institutions of Catholic higher education since graduating from Thomas Aquinas College in 1999. In early 2003, he decided to pursue his growing interest in film, attending night classes in screenwriting, cinematography, and film history at Los Angeles City College for several years. Fortified by enough cinematic knowledge to be dangerous, he followed Greeley' advice to go West; a move, oddly enough, that involved heading East to Lander, Wyoming. There, he spends his free time keeping track of his (for the moment) eight children, and thanking his lucky stars for Netflix. A regular blogger at "Summa This, Summa That" over at Patheos.com, he can be reached at JosephSusanka@gmail.com, and followed at www.facebook.com/JosephSusanka and www.twitter.com/JosephSusanka