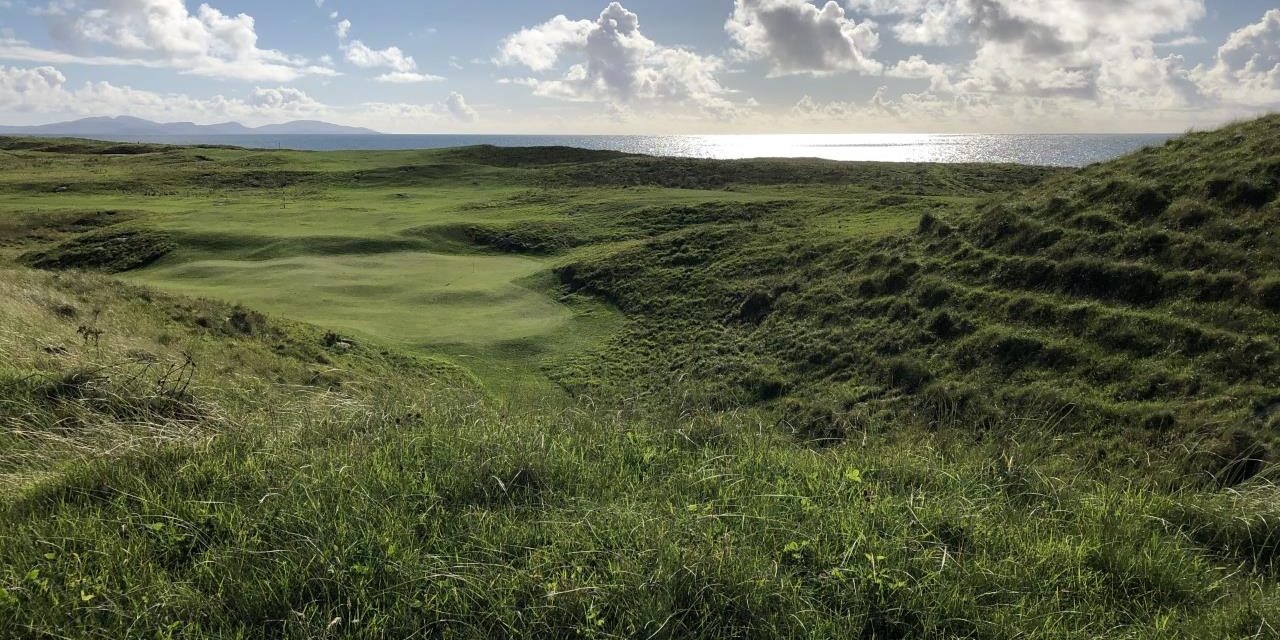 I’m on the verge of my fourth visit to the island of South Uist in the Outer Hebrides to play in a three-day golf tournament on a course built by Old Tom Morris in 1891 — Askernish Golf Club.  Only 1,000 souls live on the island today, and there were far fewer when Lady Cathcart invited the world’s premier golf course designer to build a course along the coast of her vast estate for use by her guests.

The course started to grow over in the 1920s from lack of use, and during World War II one of the fairways was used as an airstrip. But in 2005 the citizens of South Uist decided to bring their course back to life, and it reopened in 2008 with the help of two links experts, Gordon Irvine and golf architect Martin Ebert, who did their best to reproduce a routing that would have made Old Tom proud. That they did is proven by the thousands of golfers who have made their way to Askernish and the hundreds who have competed in the annual golf event for the past seven years from around the world.

John Garrity, a veteran golf writer for Sports Illustrated, has rated Askernish the #1 golf course in the world and, as it becomes better known, is gradually climbing in the rankings of other golf experts. I have played great golf courses before — many of the top 100 in fact — but I have often tried to understand why I would rank Askernish alongside any of them. The greens at Askernish are nothing like pristine greens of famous golf clubs, and beyond the fairways balls are often lost in the waist-high grasses and shrubs. Nothing is manicured, but everything is memorable. But to play Askernish is an experience comparable to courses like Pine Valley, Shinnecock Hills, Cypress Point, The Old Course, Royal County Down, Winged Foot, Seminole, Pebble Beach, and Sand Hills.

I’ve found it difficult to explain the uniqueness of Askernish to golfers who have not yet made the pilgrimage until I recalled a book written by the philosopher Edmund Burke in 1757, A Philosophical Enquiry into the Origen of the Beautiful and the Sublime. Burke is best known for his defense of political liberty, but this essay is one of his most original because of his distinction between the experience of the beautiful and what he calls “the sublime.”

The beautiful, according to Burke, is simply what pleases our senses. But the sublime is something more: It has beauty, for sure, but also imparts an element of fear and the power to overcome us. The sublime is the beautiful that feels dangerous. In the experience of the sublime we are drawn by beauty to something that overawes us and reminds us of our fragility and even our mortality.

All golfers are familiar with fear — the fear of their own failure to make a good stroke, hole a putt, compete under pressure. They are also well aware of the fear facing them by an out-of-bounds, a lake, a creek alongside the fairway, a sand trap. But these fears are not drawn from an encounter with the sublime, such as the view from the 6th tee at Askernish. A 556-yard par 5 called “The Runway” starts from an elevated tee overlooking the ocean to the right, with the island of Barra in the distance, and looks down on a fairway that sweeps upward from left to right towards a green barely visible in the distance set between two dunes.

The gradual, and deceptively steep, rise and the sensual bend of the fairway look as if its lines were drawn by an artist’s hands. Its length intimidates, into the wind it can paralyze, and the golfer knows that by going across any of its edges the ball will likely be lost or, if found, moved only by a savagely descending wedge.

Once on the fairway, the green comes into view with a front edge as round and smooth as a bowling ball. It must be cleared but then the pin appears to be on ground sloping away: What to do? How to clear the edge but keep the ball on the green? Into the wind, the problem is clearing the edge; downwind the problem is stopping it because the “deep stuff” lies just behind.

The 6th fairway is wide by any objective standard, but in the half dozen times I’ve played it I’ve found myself to the left or the right many times, and I was not alone. The visual sublimity of the hole incites even the most grooved swing to go awry, and the slightest miscalculation of a well-struck shot can catch the rough on the right or bound into the rough on the left where the fairway near and below the green slopes away along hard ground.

The “Runway” hole is typical of the Askernish layout, not because of its length but because of the challenges posed by what, at first glance, should be a fairly easy hole. At the 6th hole the fairway is wide and, except for the imperious green position, should be reachable in three shots by most golfers. The pitches, undulations, and subtle humps of the fairway and greens can send the ball, well-struck or not, into harm’s way. Once past the first cut, balls are rarely found.

Add to these elements a factor that players of links golf don’t need to be reminded of — weather — the 6,200 yard Askernish can leave you feeling as if you’ve played 7,000 yards, or more. Weather on the links becomes as important to the striking of the ball as any other consideration, affecting everything from club selection and line to the intended ball flight. It wasn’t until I started playing the links of Scotland and Ireland, some 15 years ago, that I found out what kind of golf game I really had and what the game really was about.

But there is another factor, not just inherent to links golf, but to all golf that golfers may not take into account — the pressure; the pressure they feel or the anxiety created by the sheer beauty of a golf hole. By this I mean at an unconscious level the golfer would no more want to ruin the beauty of a golf hole with the white tracings of a duck hook than he would ruthlessly drag a key across the side of a jet black BMW.

Golfers may consciously become aware of this, however, when they carefully place their, often oversized, divots back into the mark they left on a pristinely green fairway. “I sinned against the beauty of this hole,” I will sometimes say to my fellow players after an errant tee shot. Some get it, some do not, at least consciously.

But the sublime golf hole imparts to the senses an even greater challenge: The 6th at Askernish, like the labyrinthine par 5 12th, brings the danger of a sin against beauty explicitly into a golfer’s mind: He or she knows this hole is dangerous — possessing a seductive beauty yet potentially deadly. Perhaps what I have learned from playing Askernish these past three years is a lesson in how to deal with that seductiveness, that fear of losing my confident stroke in the face of such attractive grandeur.

I return to Askernish tomorrow: what draws me back is the opportunity to stride again over those 18 holes, facing the fearful beauty but responding with shots that rise and fall through the sky, finding their fairways and greens, as well as pitches and putts that trace a faithful line towards the cup.