In an August 15, 2017, broadcast, Fox commentator Charles Krauthammer characterized President Trump’s most recent remarks regarding the Charlottesville conflict as a “moral disgrace.” While fellow commentator Laura Ingraham called racism itself “evil,” Krauthammer avoided generalizing about racism or hatred or even violence, in favor of public condemnation of what President Trump did, or did not say, about specific white supremacy groups present in Charlottesville.

What the President misses, Krauthammer insisted, “is the uniqueness of [slavery] and white supremacy, the KKK and Nazism” which stain American history as an “original sin” that must be “cured” and “redeemed” by each successive generation of white people. The acknowledged presence of “bad guys on both sides,” Krauthammer asserted, is not relevant in view of the public appearance of white supremacists, regardless the levels of hate and violence.

In what theological tower does Krauthammer live? His metaphor, heard often now in connection with racial incidents, is disastrous. It equates “being white” with a permanent transgression (American slavery) that casts white relations toward people of color as always suspect, irredeemably tainted with the “original sin” of our white ancestors.

The persistence of this metaphor defies the vision of Martin Luther King and what we spent our youth struggling to achieve. I say “we” with deep affection.

In 1970, as an entering 9th grader at Thompson Junior High School in Richmond, Virginia, our south side schools welcomed several hundred black students, bused across the city as part of a court-administered effort to integrate the persistently segregated Richmond public schools. It was a volatile time, but both white and black students who remained in the public school system rapidly formed a consensus that the furious arguments of those opposed to integration needed to remain outside the school building.

With the National Conference of Christian and Jews (now called National Conference for Community and Justice) helping us sort out prejudices we barely understood, we united in hope and determination to create a safe, welcoming environment for all students.

We did not suffer notions of guilt and entitlement that kept us at arm’s length — the white teens guilty by association, the black teens entitled to suspicions and recompense. To the contrary, we were young teenagers and rapidly interested in normal adolescent pursuits, forming friendships and romances, attending school athletic events and dances, gossiping about teachers and each other. The NCCJ supported our new Human Relations Club and we cultivated active,

The then-NCCJ supported our new Human Relations Club as we cultivated active and equal interaction between races. No one inside the school, all working to make the school a success, was tainted with the atrocious behavior of those whites viciously opposed to busing, much less the historical reality of slavery over 100 years earlier.

We could not avoid the outside world, though. One night, after a football game in Petersburg, angry protesters pummeled our bus with stones. The next season, after a basketball game at George Washington High, the coaches suddenly screamed for us to close the bus windows and lay on the floor – as hostile parents again barraged us with debris. Talking to a friend one night on the phone, I heard his mother shrieking at him, “Get off the phone with that “nigger-lover.” He apologized and said we could not be friends any longer; I spent too much time with “niggers.”

We were not without sin. We brought – we ALL brought – sometimes uncharitable stereotypes to our interactions. But we also brought a profound commitment to letting wrongs go, seeking and giving forgiveness and forging a community of equals. This was, after all, the age of Martin Luther King whose condemnation of hatred and determined, faithful hope in the power of love inspired our day-to-day lives.

What a different social experience Thompson Junior High School would have been in 1970 had the white students to answer for slavery and white racism as personal “original sin.” As Professor John Patrick Leary recently wrote, “Original sin is a sin, after all, for which no atonement is ever possible.”  He continues:

“[H]ere is the major problem with describing slavery as an ‘original sin’: . . . the phrase becomes a sort of ritual performance of a generalizable guilt, in which the sin, and therefore the repentance (or the fiery retribution, depending on how wrathful you and your God are feeling), resides nowhere and with no one in particular.” (Emphasis added)

American whites become, as Krauthammer suggests, accountable for the grave wrong to American blacks in past history, despite that no living white American has ever owned a slave nor has any American black been a slave. Rather, the attitude towards American slavery as an “original sin” bestows responsibility on all whites-in-being to “cure” and “redeem” the wrongs of a now illegal, condemned industry of human ownership, with forms of singular, unique penance to all blacks-in-being.

I cannot think of a construct more certain to promote discomfort, ill will, and segregation. Are we to convey to our children that, if you are white, you carry guilt for a historical sin against the black children in the neighborhood, in the school, in the community? Are we to teach our children that, if you are black, the white children in your life have a responsibility to atone for the historical industry of human ownership and trade?

How can we possibly expect our children, none of whom are born with racism in their hearts, to approach each other with generosity, curiosity, and charity if their perceptions are formed with a willful intention that they must atone for slavery?

I found my first boyfriend during this period of integration at Thompson Junior High School. An athlete from one of the black neighborhoods across the James River, we spent long after-school hours doing what young teenagers often do: talking, fondling, laughing, teasing. With few exceptions, our relationship stayed within the boundaries of the school, which both protected and even encouraged our interracial involvement. We did not see black or white; we did not suffer guilt or shame over a history we both knew; we delighted in the hope and wonder of a world that had brought our paths to cross.

I long for the age of Martin Luther King. I pray for leadership that does not see, much less exploit, black or white. I wonder if we will ever again recognize that original sin knows no race, no gender, no age, but binds us together in the mystery and challenge of overcoming our worst inclinations toward each other. During the Civil Rights era we seemed so much closer, so much nearer Dr. King’s vision that “man must evolve for all human conflict a method which rejects revenge, aggression, and retaliation. The foundation of such a method is love.”

During the Civil Rights era, we seemed so much closer, so much nearer Dr. King’s vision that “man must evolve for all human conflict a method which rejects revenge, aggression, and retaliation. The foundation of such a method is love.”

Sadly, that’s as close as we got to a future rooted in love and hope, rather than tethered to the sins of the past – at least for my lifetime. 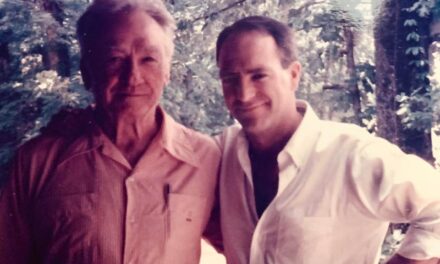 A New Translation of “Beowulf” Challenges Its Christian Meaning