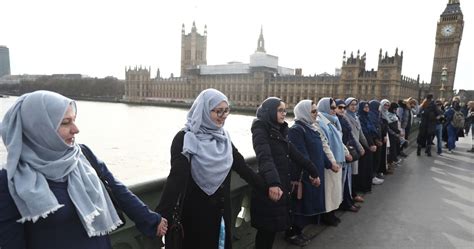 I’m tempted to say that March 23, 2017 will be remembered as a day of infamy, but someone a few decades back used the phrase rather memorably, and, besides, it’s doubtful that many people today actually will recall anything especially startling about the March 23rd, not even a month after the fact.

To refresh collective memory, less than a month ago Kalid Masood drove his car into a crowd on Westminster Bridge, killing four and injuring many more. The headline in The Independent read, “He acted alone, his reasons may never be known.” Actually, there’s more to it than that. Deputy Assistant Commissioner Neil Basu of the Metropolitan Police said that “even if” Masood acted alone, there’s really no way of knowing what his motive was. And that’s more or less where the matter has remained, at least in regard to criminal investigation, except for the suspicious discovery of Masood’s conversion to Islam during an earlier term in prison.

Does anybody outside of the police really care about this recent act of terror? I hate to admit it, but there’s a terrible pun in that question because the answer is that CAIR cares. Otherwise known as the Council for American and Islamic Relations, CAIR is a front group for soft-jihad, the kind that kills as few as possible but quietly advances the cause of Islam in communities throughout the Americas, preaching good will, painting Islam as a “religion of peace,” planting mosques, and whitewashing terror.

CAIR tends to be Johnny-on-the-spot whenever a Muslim manages to play Islamic angel of death in a Western city. A case in point, when, the week after the London attack, a mass of Muslim women stood hand-in-hand on Westminster Bridge to show their solidarity for the slain and wounded, CAIR executive director Imraan Siddiqi declared the gesture “a powerful message.” He added, “One of the primary principles that Muslims go by is ‘stand firmly against injustice, even if it’s against yourselves’—even though the perpetrator was a violent individual who didn’t embody the principles of Islam, his name alone acts as a sort of guilt-by-association by many who choose to manipulate these events to further their cause.” He said that in English, so the statement doesn’t need a translation; however, it does need an interpretation, something along the familiar lines of “No Islam here; Masood was just a deranged lone wolf.”

There’s an awful lot of “guilt by association” these days mainly because there are so many terrorist attacks in the West—and the East if one includes Russia—by adherents of Islam. If Mr. Siddiqi is right, the lone wolf terrorists we hear about every few months must be getting “the faith” all wrong.

Of course, there is the possibility that Siddiqi is counting on the “religion of peace, we-are-the-world, this-land-is-your-land” message to blind Europe and America to the real nature of his creed, that of a totalitarian system bent on conquest and the submission (the literal meaning of Islam) of non-believers.

I have no window into his soul or the souls of his fellow believers at CAIR (you know, the folks the West once called infidels), but there is reason to conclude that too many Westerners are buying the message of Islam as a “religion of peace” and terrorism as a matter of stricter gun control.

Take the story of those Muslim women at Westminster Bridge. Perhaps they were sincere; perhaps they abhor the indiscriminate killing of innocent people in places like London, Paris, Brussels, and San Bernardino. Allowing that, maybe they also entertain visions of an Islamic Europe by, say, 2099, much as Middle-East expert Professor Bernard Lewis predicted in 2002. Whether they do or not, the possibility of such a fundamental transformation grows by the day, and in no small part because the West is all too willing to put the smile of brotherhood and hijabbed sisterhood on the face of Islam.

One sees how desperately Europeans and Americans alike want to believe that Muslims and Islamists are really just like us except for a few exotic, ancient practices. I found the article about the Muslim women on Westminster Bridge at a site called “A Plus,” which styles itself as “a digital media company devoted to spreading the message of positive journalism, a kind of storytelling that focuses on our shared humanity.” Mr. Saddiqi’s comments were reported somewhat uncritically, and you can’t get much more “positive” than that.

On the day of the Westminster attack, I attended a gathering sponsored by the English Department of Liberty University in which students and professors read favorite literary works. In the course of the evening, a graduate student read a poem of his own composition entitled “Subhanallah,” prefacing the performance with a few comments about his “Muslim” aunt, with an exhortation that the audience try to gain some understanding of “Islam.” Subhanallah means, roughly, praise God—along the lines of hallelujah.

As for the poem, the overall point was that it would be a much nicer world if we Christians would praise God as sincerely and consistently as the author’s aunt did (which, not surprisingly, was often). When he finished his reading, the audience (save one member) applauded more or less vigorously.

As it happens, a song exists with the same title and meaning—and, no, I’m not suggesting the LU student committed plagiarism. What’s of interest is the comment section on YouTube where it appears. Predictably, the remarks from Muslims are effusive, but more interesting are the numerous posts from self-identified Christians.

Here’s a representative example: “I find this music truly beautiful to listen to with such a great positive message, much more profound than most being played mainstream. No matter what, if all exercise goodwill from what they believe in their heart is right, inner peace is what will transcend into world peace.”

Another, with the usual internet disregard for punctuation, declared, “to be honest i am a Christian and find this song very beautiful i hope every one has a blessed day!” And, in words that might have warmed Mr. Siddiqi’s heart: “There is beauty in all religions. We are all headed to the same destination; we just are taking different paths.” It might have been a CAIR press release.

The last time I checked, Christians worshipped the one true God: Father, Son, and Holy Ghost, three persons in one divine essence, the one and only way, truth, and life. Seems that doctrine is getting lost in the flood of good will, which is, pardon the cliché, tragic. From the eighth to seventeenth century, adherents of Islam, the religion of peace, sincerely tried to conquer Christendom, their final defeat coming in 1683 at Vienna. The Christian West succeeded in thwarting a false religion and a tyrannical politics only because it was the Christian West, a civilization of sufficient faith to stand up to manifest, godless evil.

Where is that faith today? Is it just one of many “beautiful” religions? If it’s more, much more, then it’s time to start defending the non-negotiable truths about our eternal and historical faith, along with the free institutions that emerged in countries—not Islamic countries—that held them tenaciously. This Easter season would be a good time to begin.

The Dormition of Mary with St. John of Damascus

Why Are the Knights of Columbus “Partners” with Crux?