How does one begin to describe ‘Flesh and Blood’? It’s a four-part drama currently running on Public Television’s Masterpiece (also, for those who have missed parts, on Amazon Prime), but it is plotted in such a way that the viewer is constantly asking the questions associated with a mystery. Certainly, the key question is Whodunnit? However, in ‘Flesh and Blood,’ one is not quite sure what, if anything, has been done.

And, need I say, for a “whodunnit,” that’s a real brick wall, yet it’s what makes the mini-series fascinating.

The characters and the conflicts driving them may not seem very unusual. Vivien (Francesca Annis), widowed for over a year, announces to her three grown children that she has a boyfriend, a retired surgeon (Stephen Rea), and, well, the kids are not happy. The one son, Jake (Russell Tovey), is both critical and suspicious from the word go. Who knows what this beau is up to?

And after forty-five years of marriage to dear old dad (who apparently was not so dear to Vivien), the idea of another man in his mother’s life is outrageous. The elder daughter Helen (Claudie Blakley) has qualms too. Natalie (Lydia Leonard) alone remains the one to raise no real objection. As for Mark, the doctor, and boyfriend, he soon pops up at a rather tense family get-together and proves a soft-spoken, generally friendly man who gives every appearance of truly caring about Vivien—although he does have a peculiar tendency to surprise her: a spur-of-the-moment trip to France, the gift of a red sports car, jewelry.

But, hey, ex-surgeons are rolling in cash, right?

Then, there’s the neighbor, Mary (Imelda Staunton). One could almost say the story unfolds from her point of view, mainly because she’s an irrepressible snoop and tends to survey events next door with her always-handy binoculars. She’s lived adjacent to Vivien for years and clearly thinks she has a special stake in her life. How far does this selfish privilege go? When Mark sends Vivien an apparently expensive flowered lounging robe, which arrives while Vivien is away, Mary collects her mail, steams open the package, and spends the day wearing the gift, watching TV. And when she seals it up for Vivien’s return, she removes the card that says “Love, Stephen.” Possessiveness? Maybe so.

So what makes ‘Flesh and Blood’ different from dozens of similar tales? For one, the time frame is—how to put it?—delightfully (or maybe devilishly) confused. The story doesn’t begin with Vivien telling Jake, Natalie, and Helen about Mark. No, it opens at night with sirens and the flashing lights of a squad car and an ambulance in front of Vivien’s beach-front home. Voice-over comments from Mary that soon become visible interrogations by two policemen (David Bamber and Karan Gill) indicate something indeed dreadful has occurred. But what? An accident? A murder? Illness?

In effect, then, the plot unfolds in flashback, or more or less, since the interrogation scenes (not always of Mary but of the children too) interrupt the flow of the story.

About those children. Their lives are anything but rosy. Jake is estranged from his wife due to his compulsive gambling. He swears he’ll pay every cent back, and, indeed he may as well (swear, that is) because his wife won’t take him back until he clears the debts. Oh, and he’s earning a good chunk of the money as a gigolo. Helen and her husband’s marriage has grown cold, even as she deals with an irate employee whom she has fired and who has sworn revenge. Natalie is having an affair with her boss—and his wife knows. These muddled lives put an interesting gloss on their sometimes harsh critiques of Mark: Physicians, heal thyselves!

But what of Mark? Innocuous he may seem, but is he all he claims? The resumé looks genuine: retired surgeon and widower. But when he takes Vivien to Spain (en route to India) where they are to meet his daughter, the daughter doesn’t show, and Vivien’s inquiries are met with further excuses. Does the daughter exist? He also enjoys rocketing down the road in the red sports car with Vivien with a frightening precipice on one side of the road. Is this Hitchcock’s Suspicion II?

How will the story end? With one episode to go, I can hardly say, but I’m smiling as I write. That may tell you that I’ll be watching to find out. 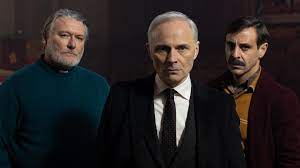