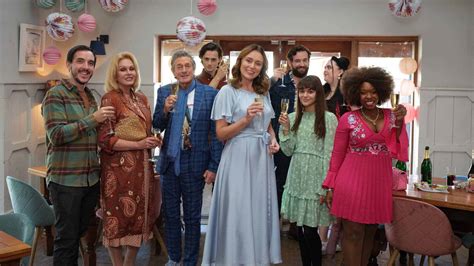 Years ago I read a review by the noted critic and scholar Frank Kermode of Aldous Huxley’s last novel Island. The opening was memorable. Perhaps, Kermode wrote, the superlative seems excessive, but Island may be the worst novel ever written. I’ve waited years to make a similar comment, and finally the time has come. The superlative may indeed seem a stretch, but Finding Alice (an Acorn exclusive) may be the worst miniseries ever produced. With a stupid plot and impossibly vacuous characters, it punishes viewers so cruelly that it’s positively a public service to warn even mildly intelligent people against something only the brain-dead could enjoy.

For the curious, here’s the story. Harry (Jason Merrells), a combination builder-developer-architect and God Himself knows what else, escorts his family, consisting of the eponymous Alice (Keeley Hawes) and daughter Charlotte (Isabella Pappas), to their new “dream house” he’s built. A neo-Bauhaus monstrosity of boxy components and stark windows, it looks like something a kid would make out of shoe boxes.

Once they’re finished oohing and ahhing, he informs them that they’re in a smart home. They break out wine to celebrate; then Alice and Harry ascend the wooden, banister-less stairs to see the master bedroom. A romantic moment? Not quite. She needs to visit the bathroom, but there’s a smart-home hitch: she can’t figure out how to flush the smart toilet. After calling Harry for advice, she steps out on the landing, only to see him lying at the bottom of the stairs, dead.

Now this may sound intriguing, but the inexplicably moronic actions of the characters, with Alice as chief moron, kill whatever chance Finding Alice had to become interesting. The police are called in quickly and begin asking inevitable but routine questions. Bizarre as only she can be, Alice meets them in a flashy dress of red with white flowers. It’s a wonder she doesn’t offer them cocktails.

Whatever her reason—and reasons are few and far between in this mulligan stew—they must ask whether she and her husband argued. She quickly informs them that he wasn’t her husband. One suspects theirs was a relationship based on “honesty,” not “convention”: nineteen years of unwedded bliss. Anyhow, the police ask if there was an in-home camera to film the accident. Well, yes. And even though later she views the sad event, which clearly exonerates her, she unaccountably tells the police the camera was not on.

If you attribute such moments to bad writing, you’ll be right, but they’re anything but rare. So frequent are they that they suggest a conspiracy, an inside joke by the writers to see how many pointless developments the viewers will swallow.

What happens next? Jerry (Kenneth Cranham) and Minnie (Gemma Jones), the parents-in-law who aren’t really parents-in-law, come over to console the grieving wife who isn’t a wife. In short order, they reveal that Harry deeded the property to them; inheritance taxes being what they are in merrie England, they must sell. Alice declares that Harry meant the property to be hers according to, one imagines, some metaphysical right of concubinage, and with the pressed lips and wagging head that only overacting can produce, she digs her heels in and sends them packing.

Alice’s next move is to ignore Jerry and Minnie’s wishes to bury their son rather conventionally in a cemetery. She will dig a grave for him on the property that, mind you, she doesn’t own. Harry, the jack-of-all-trades, still had a digger or back-hoe sitting on the land, and, quick as a wink, Alice becomes a master of the machine, digs the hole, and gets Harry in it.

As for the grave-side service, well, a willing vicar (Miriam Haque)—a woman, of course—comes to the rescue. Alice informs her that Harry was not much for God, but no worries. The priest is a flexible sort who will, as she jokes, even do a Satanic service on request, so sending the deceased into the cosmic abyss shouldn’t be a problem. The gathering by the flower-heaped grave, surely meant to tug the heartstrings, is as trite and empty as someone not much for God could wish.

If Dante had created a circle in Hell for architects and builders, Harry would surely be there. He’d also be in one for businessmen. When Alice begins to investigate the state of the firm, it turns out he had a partner she knew nothing about, Tanvi (Ayesha Dharker), a rather irritating and smug lesbian who lives with her “wife” and their two children. Hmm. Where’d the children come from? More on that later.

As for the business, Harry had built some apartments (another modern blight on the landscape) and had purchased some land he hoped to develop for “affordable housing” since he had a social conscience. Well, you can’t do things like that without investors, and you can’t have investors without some security. Then comes the real surprise. Alice discovers that her loving partner had conveyed half the business to Tanvi and half to her. Did he work this unorthodox deal to protect his assets against possible creditors, much as he did his house?

Now, I don’t know much about British law, but there’s something just a bit shady, maybe fraudulent about such a transaction (and there is a region in Dante’s Hell for that). But in the cockeyed world of Finding Alice, nobody sees anything wrong: just Harry’s idea of business as usual.

And then there’s his illegitimate son, George (George Webster)—the product of a liaison before he was cursed with Alice—a young man who wanted to know his father and get in on the development of the land his father left behind. As for Tanvi’s children, Alice finds Harry left a generous portion of sperm in storage, and she can’t but wonder whether Harry loaned some to Tanvi. She, also, has the notion to artificially inseminate herself to help populate England with a few more Harries—maybe to perpetuate his legacy of fraud, fornication, and godlessness.

The older actors in the series seem to fare somewhat better than the younger. Cranham and Jones are familiar faces who have almost invariably pleased in a variety of roles through the years, as have Joanna Lumley and Nigel Havers as Alice’s parents. All the same, I don’t know how these four will live down Finding Alice. The younger characters might have been played by any number of actors, and, by and large, the ones chosen perform competently. The real disaster is Hawes. Her nervous, ticky, boo-hooing, boorish, clueless Alice stinks like yesterday’s, today’s, and tomorrow’s garbage. I could forgive her if I thought she did it only for the money, but—the credits tell the tale—she’s co-creator of this asinine mess.

As sure testimony to the tastelessness of the viewing public, there’s a second season coming. If you want to plumb the depths to which our culture has sunk, you might watch Finding Alice. Otherwise, only a masochist (or reviewer) could endure it. 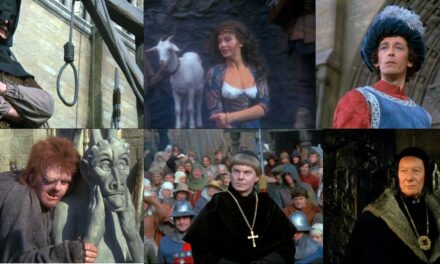