True believers come in all shapes and sizes. Although it’s sadly true that many true believers can be simply obnoxious regardless of what they believe, commonly we regard such people as smart or stupid according to the object of their belief. Few people reading this site will object to a man or woman that ardently believes Jesus Christ is the second person of the Trinity; few would argue that one’s faith is simply personal.

What I think of the King of kings has a great deal to do with my attitude toward morality, history, and the constitution of the visible and invisible world. Let the naysayers scoff as they like, steadfast belief in Christ stands as the central fact of existence.

But what of belief in something intrinsically important that’s elevated far beyond its proper bounds? That may not necessarily be a covert way of talking about politics . . . but let’s talk politics, taking our keynote from Rick Newman, Yahoo! Finance senior editor.

Mr. Newman strikes me as a true believer, but, you may ask, in whom or what? As far as I can tell, the who is Joe Biden and the what is Biden’s big spending plans. An article that appeared February 19th this year, a little over three weeks after Papa—or Grandpapa—Joe took office, trumpeted the good times to come: “Get Ready for the Biden Boom.”

Prosperity was to descend on us from on high, courtesy of Biden’s “American Rescue Plan,” pricetag of 1.9 trillion (later pared down slightly by our budget-conscious Congress), that surely would produce a soaring GDP this year right into 2022, just in time for the mid-terms. As Newman explained, “So by summer or fall, barring surprises, the economy could be roaring ahead like a cartoon Joe Biden smiling in a shiny convertible, behind his gleaming aviators.”

Well, Rick, as Kamala Harris said to her birthday well-wishers: Surprise! The shiny convertible is a clunker, and the aviators shield blind eyes. The roaring economy has slowed to 2% growth, strangely reminiscent of the Barack Obama years when Joe was a heartbeat away from the oval office. Inflation stands (though hardly standing still) at a 31-year high. Gas prices have doubled, largely due to Joe’s shutting down of drilling on public lands, cashiering the Keystone Pipeline, and making us OPEC-dependent.

(Even if Joe were speeding ahead in his shiny convertible, he’d be keeping a wary eye on the gas gauge.)

A mere 41% (RCP average) approve of the president’s handling of the country, and over 60% of registered voters don’t want him to run for re-election in 2024. Any good news? About 25% are clamoring for a second term—a solid base by anybody’s standards, especially if the body is Rick Newman.

Because, you see, Rick still believes. The bad economic stats, the snoozing in Glasgow, the embarrassing press conferences, and the regular retreats (from reality) to Wilmington, Camp David, and Nantucket ought to prompt a reassessment, a mea culpa. But no. Biden is a winner. Take Newman’s most recent analysis of “Bidenomics.” The passage of the horrifically extravagant, inflation-boosting $1.2 trillion “infrastructure bill” is hailed as “The Win Nobody Noticed.”

To the curious, the infrastructure plan allocates less than half of its final enormous sum to roads, bridges, airports, and the like (WiFi expansion somehow worked its way to the trough). But even if every last cent were going for real infrastructure, the question of payment would not go away. The administration has assured the country that “tax cheats,” billionaires who have fudged on their IRS returns, will be brought to heel for their past sins to the tune of $1 trillion.

As one CPA, Howard Dvorkin, has observed, it’s rather poor policy to assume not-yet-collected revenue will pay for anything—assuming there’s anything to be legally garnished to begin with.

And that’s just one problem. The other is actual expense. Bills out of Washington have a bad habit of costing far more than originally promised. Can anyone doubt the $1.2 trillion price of the infrastructure bill will skyrocket, with its promised benefits—new streets and bridges—materializing at a painfully slow pace?

The answer is, yes, some will doubt. They’re the true believers, those who regard a “win” as good for Biden, even as it’s poised to drive us deeper into a hole of debt that will perpetuate inflation and create more bureaucratic red tape, things that are strangling our economy and blighting our children’s future. But, hey, a win is a win, and, besides, prosperity is just around the corner. 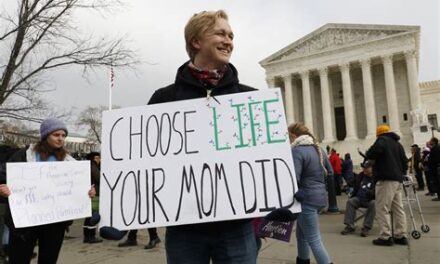