But For ‘Ceremony’ Where Would We Be?

When May and June roll around, at least here in the United States, it’s not unusual for many of us to get suddenly very busy. For May, high school and college graduations are what all the busy-ness is about on almost any weekend of the month, and as for June, it remains, so far as I know, the most popular month for weddings.

A great deal of money and time go into these ceremonies, and with them not a few headaches. The truth is—I think I speak for the overwhelming majority here—we anticipate them with mixed feelings of delight and dread, and we’re glad to get them over with and back to normal life, which, for all its day-to-day sameness, seems a blessed relief after the brief period celebration. Unlike Christmas, no one would wish every day to be a graduation.

King Henry V, the “Hal” of Shakespeare fame, had mixed feelings about “ceremony,” oddly because for him it was too familiar. That’s one of the problems with being a monarch: the fancy dress of one degree or another and formal manners (both yours and those who bow to you) are the very stuff of existence, a daily and often irksome necessity.

Ironically, to Henry ceremony was humdrum, space, as he understood it, in which the real man might get lost. Hence, his desire to “gentle the condition” of his common soldiers, making them his blood brothers in battle at Agincourt, where a man could be measured by his virtue instead of his royal or common trappings.

One can understand Henry’s feelings in this wish. A king or general who longs to, as we say today, dress down and mingle with folk of lesser rank is not unlike the college graduate that, even with the memories of hugs and kisses still fresh, strips off the academic gown and does what we’re all told we want to do: he relaxes.

As I say, the phenomenon is common enough to be no phenomenon at all. But has it become too much the norm? In our desire to relax, to assert our casual selves, to completely supplant the stiff and formal with the wrinkled and grungy, have we impoverished ourselves?

Of course, many will reply that, after all, we still do have graduation ceremonies, weddings, and anniversaries, and I can hardly deny the fact since I brought up the subject citing the sometimes-irritating reality of such events. But go to almost any ceremonial occasion nowadays and look around; they are becoming visibly un-ceremonial.

One of the first things you’ll notice is how informal the celebrations have become. For one thing, processions occur less frequently; at my university’s baccalaureate, the faculty meanders in, and as long as they’re present when the festivities begin, all is well. A visible, formal aspect of the event has simply ceased to exist.

Then there’s the matter of attire. It’s one thing to see children in tee-shirts and shorts or blue jeans; it’s another to count the number adults dressed down to the same level of informality. If clothes say anything about the occasion, the visual evidence of celebration, which traditionally calls for special clothes, assuredly has degenerated.

And if your eyes tell you what I have no doubt they will next open your ears. In 1974, the year I graduated from college, there was a noticeable degree of clapping from familial cheering squads; nevertheless, the real hijinks were reserved for the students getting their degrees, a few of whom—I will not lie—acted like morons. That said, I recall four years earlier at my high school graduation, conducted in a church, audience and graduates maintained a reserved silence, possibly in respect for the place. Ceremony then was still possible.

Fast-forward to 2018. Today, a general buzzing infects the traditional degree ceremony, and, as the degrees are conferred, cacophony rises to a pitch: whistling, shouting, and whooping, as if the real point were to draw attention to those cheering, not to the ones being cheered.

Are other ceremonies similarly infected? Weddings in other cultures can be raucous events, but in our society, they have maintained a marked degree of formality—largely due, I think, to the proper association of marriage with the church. How long that will last I cannot say, but the dressing down at weddings has already begun, often through the encouragement of the married couple’s families. What will come next, I’m can hardly guess.

Ceremony, formality, manners, and solemnity may not seem pressing matters of minute-by-minute existence; cold hard facts say they’re not if life is defined in terms of survival only. But it’s a sad state of affairs when civilized men start to school themselves to believe social forms are dispensable. The lesson is a delusion. Civilized living amounts to defined arrangements, a hierarchy of ceremonies: how to give and how to get; how to win and how to lose; how to advance and how to give way.

When we eat at home, we are not animals approaching a trough or tearing into a kill. A table is set, and manners are observed. And in public ceremonies standards should be more exacting—and in a healthy society habitual as breathing.

The wonderful film by John Ford from 1962 The Man Who Shot Liberty Valance has a brief moment that deserves attention. Ransom Stoddard (James Stewart), a newcomer to the town of Shinbone in the Wild West, tries to show the young, illiterate Hallie how to set a table. She looks at him and says, “You superstitious?”

I’ve often wished someone would ask me that in a similar situation. My answer would be, yes, I am rather superstitious or maybe just suspicious that a world without manners, forms, and ceremonies is one step from anarchy.

The night before the battle, Shakespeare’s Henry mused that the commoner living his days without ceremony “[h]ad the fore-hand and vantage of a king.” That may be so, but the because of ceremony, that same commoner woke up every morning in a kingdom. Possibly I’m wrong, but I think that beats ugliness and chaos.

The Christian Review: A Guide to Writers and Readers 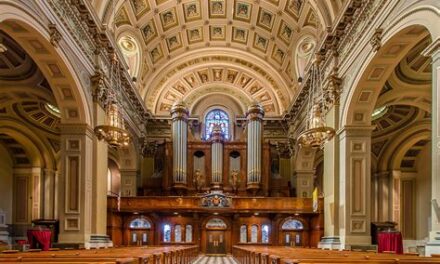 Are Women Done With the Roman Catholic Church? A Reaction to the Grand Jury Report from Pennsylvania