The Anglican Faith Bartered for Triviality: The Devil’s Bargain

In the September issue of The New Criterion, Anthony Daniels (aka Theodore Dalrymple), the astute but atheist critic of cultural decline, writes about the empty annual art exhibition of the École nationale supérieure des beaux arts graduates:

“Strange as it may seem for someone without religious belief to say it, the loss of belief that there is anything sub specie aeternitatis has rendered art trivial, no more than a kindergarten activity for adults who want to feel special and whose thirst for self-expression is greater than anything they have to express. Moral and aesthetic capital is not expended all at once, but gradually; it has run down steadily until none remains.”

Daniels’ confession, if one may call it that, was not dissimilar to Douglas Murray’s in The Strange Death of Europe. There, Murray held forth at some length on the connection between Western Europe’s sad indifference to traditional Christianity and its concomitant inability to stand firm against the growing threat of Islam. Like Daniels, Murray is an unbeliever, sometimes describing himself as a Christian Atheist, one who recognizes, reminiscent of Arnold, the need for Christianity as the bedrock of civilization without actually professing the faith.

It is somewhat unusual to find conservatives that do not believe in God or, more specifically, who are not Christians, but they do exist and are becoming more noticeable. Charles Cooke, George Will, and Charles Krauthammer—fine writers and commentators to a man— have no religion. Jonah Goldberg, though Jewish by birth, seems, as far as I can make out, indifferent to religious practice (although, I suspect, like Murray, he sees the need for it). And as much as I would rejoice to see each one of these worthies convert to some form of Christianity, it almost goes without saying that I’m not holding my breath.

Most believers know or should know that conversion is and will always be a mysterious thing. It is the business of individual believers to watch for the opportunities as they arise to preach the Gospel to those who in spite of themselves need it desperately; more than that, it’s the responsibility of the Church to encourage it.

In the United States, the Great Commission moves forward steadily (although the pace varies from decade to decade) thanks to two very different phenomena: the spirit of low-church Protestantism (and schism in the larger denominations) and Roman Catholicism. These two often bitterly opposed bodies of Christians have stayed just strong enough to make sure the Gospel is preached and churches full. Controversies, whether involving fornicating televangelists or pedophile priests, have put a brake on the Church’s progress in garnering new believers, but the desire and the ability to recover have not been lacking.

But what happens when, to borrow Daniels’ words about the École nationale supérieure des beaux arts, loss of belief renders a national Church trivial? Such is the lamentable state of the Church of England, and, as a Reformed Episcopalian, I write with great concern. Unlike Roman Catholic Churches elsewhere in Europe that might still regain their former strength from Rome with a pope determined and charismatic (in the true sense) enough to inspire revival, the United Kingdom’s church, perhaps because it has been so national, has seen British Christianity dwindle to triviality as its own leadership has lost its way.

A recent article at The Gatestone Institute asked pointedly, “Is the UK Overthrowing the Christian Basis of the West?” Journalists, theologians, sociologist all appear bewildered by what has happened—and how quickly. But they’ve agreed the facts speak for themselves:

A quarter of British rural parishes now have fewer than 10 regular members of the faithful on Sunday. There are no more children in 25% of the Church of England’s congregations, as new figures have just shown. On average, nine children attended each church service across all Anglican churches in 2016. Generally speaking, churchgoers have dwindled in the UK by 34,000 in just one year.

And it gets worse, as noted by Linda Woodhead, professor of sociology of religion at Lancaster University. The number of Britons identifying themselves as Anglican has halved itself in seventeen years (from a rather sorry 30% in 2000 to 15% today); a paltry 3% of that number falls between ages eighteen and twenty-four.

As Melanie Phillips in The Times reports, at the heart of the Church’s decline is its flight from the Gospel and its “capitulation” to secularist social justice causes, such as gay rights and “gender fluidity.” Recently, Phillips’ article goes on, Linda Ashworth, an advisor to the Archbishop of Canterbury, quit the “inner counsels” in protest over the “agenda of revisionism” that is driving away believers. “We have a liberal agenda,” Ashworth complained, “because the church is not anchored in the Gospel. There’s no more conversation about heaven, hell, sin, forgiveness, judgment.”

Such topics strike modern ears as “judgmental,” or, in other words, insufficiently tolerant, but, as Phillips correctly says, the same souls crying for toleration are the first to bully Christians into accepting their secularist creeds, increasingly with the exercise of laws against “hate” speech. How the Church of England will survive apart from schism is anyone’s guess.

The Triune God whose existence creation declares established a moral code that is discernible and that has nourished the West not only for the two thousand years since the advent of Christ, but in the codes of numerous pre-Christian civilizations that, in spite of their necessarily dark religious practices, grasped fundamental principles of right living that were in the fabric of creation. One may take their example as evidence that even in our benighted times, the moral order will somehow prevail, regardless of the Church’s status. But true justice and real charity have become correctly defined in the West as core principles of the faith. Man is made to worship and, though free to disobey, to follow the path of righteousness.

If Britons choose the alternate path of triviality, they will find themselves descending first into smiley-faced hedonism, then social and spiritual chaos. Likely as not, they’re already there. And that’s the happy scenario. While the clerics in Canterbury sleep, Yeats’ “rough beast,” though it may not be “slouching towards Bethlehem,” is growing with alarming speed in Britain’s “No-go” zones, waiting for its chance to fill the vacuum of triviality that was once the soul of a great nation. 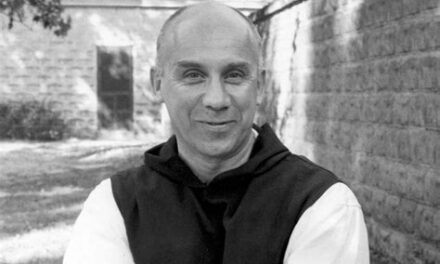