Aachen Cathedral a No-Go Zone: A Cautionary Tale About Terrorism

It’s a rare soul who hasn’t heard the old saw about the two ways of looking at life, either as a glass that is half empty or as one that’s half full. I suspect most people take the opposition as a cut and dried picture of the pessimist versus the optimist.

But if you stop to think about it, the half-empty/half-full formula suggests something very different. After all, wouldn’t the true pessimist see the glass as irrevocably empty, even down to the last drop, which surely is much worse than the half glass? And isn’t it just as true that as much as our pessimist laments the disappearance of the first half of the glass, he can at least look forward to first enjoying and then lamenting with a certain grim pleasure the drained glass?

Besides, if the glass at that point is no longer full, the pessimist may find himself satisfied, but if he isn’t, he knows there will be other glasses that, truth be told, must be emptied to be enjoyed.

I could make the same case for the optimist, but the point should be plain: a guarded pessimism or a guarded optimism, where the key term is “guarded,” is a necessary aspect of experience. Those relatively constant joys of life—of family, friends, health, and freedom—supply a steady stream (or sometimes a trickle) of blessing, but the wise man knows they are granted to us in a world of contingency. A loved one dies; health deteriorates, and our freedom, something perhaps most in the world does not enjoy, we maintain only with the greatest care.

Is it pessimism or wisdom to acknowledge this truth? I write from a comfortable room in a very pleasant upper middle-class neighborhood in a state that, happily for me, has four seasons; in front of my desk is a large window from which I can watch the cycles of the year exhibit their peculiar beauties. It would be easy to become a cock-eyed optimist under such circumstances, but news from various sources, usually involving men and women in places far from home, won’t let me ignore the inevitable need for a measure of pessimism in my life.

The catastrophes that shake our peaceful lives are growing disturbingly familiar. Is it two years since the attack on Charlie Hebdo; a mere thirteen months since the modern Massacre of Paris (130 dead)? Were fourteen murdered in San Bernardino a year ago, thirty-two killed in Brussels last April, and forty-nine dead in Orlando just six months ago? And yesterday came the news of twelve dead at a Christmas festival in Berlin. Any bets on how many more dead Islamists terrorists will have racked up by Christmas 2018? “Alahu Akhbar,” baby, and to all a good night.

Yes, that’s supremely pessimistic. But for those of us who yearn for a realistic grasp by the heads of state in Europe, the U.K., and here of the crisis challenging the West, the optimism glass is pretty dry. Angela Merkel seems utterly incapable not only of stemming the tide of “refugees” into Germany. Neither can Merkel protect her own citizens against certified (if we are to believe German authorities) terrorists, such as Anis Amri, the still at-large perpetrator of the Berlin murders.

“No-Go” zones are slowly but steadily sprouting in France, Germany, Belgium, and Britain, as Andrew McCarthy reports, with the clear intent of providing terrorists with safe places and would-be terrorists with training.

In our own nation, a number of Minneapolis Somalis in a recent interview declared their unqualified dedication to Sharia over the Constitution. The Confederation of Somali Community in Minnesota (CSCM) rather innocuously recites in its mission the goal of helping “Somali youth and families overcome the social and economic obstacles that impede growth while maintaining our cultural heritage,” along with providing “safe places.” The organization may be as innocent as the Kiwanis, but it hardly sounds like the stuff of which assimilation is made. What are the odds that such “safe places” will soon be, if they are not already, incubators of terrorism in a year or two?

During the 2016 presidential campaign, Donald Trump was much criticized—no, castigated—for suggesting (certainly with his usual hyperbole) a ban on Muslim immigration to the United States. It’s an extreme measure, to be sure, but isn’t it about time we in the West realized these are extreme times? Islamists, peaceful or blood-thirsty, have one goal: the world-wide Caliphate. Their strategy is to infiltrate the West by building small communities, to take advantage of our civil liberties and non-immigration enforcement, and peacefully or violently, as occasion requires, to impose a law alien to a free society.

As I noted above, assimilation is not part of the plan. What will our condition be on the day we wake up to find organizations like The Confederation of Somali Community in Minnesota in Atlanta, Phoenix, Wichita, and Boise?

United States’ immigration law, as Mr. McCarthy noted recently, is discretionary. All it takes to enforce it to guarantee the preservation of our way of life is a little discretion. Our country has been and remains a wonderful and generous place. Nevertheless, if we want it to remain so, we will have to start looking at the critical state of the West with clarity, free from both starry-eyed optimism and apocalyptic hopelessness.

The order of the day calls for a moderate pessimism, an exercise of strict control of our borders, a constant eye on enclaves of potential terrorism, and a recognition that our enemies do not operate according the rules of fair play.

Ask the families of those who died in Berlin. But, as a tempered pessimist might say, there are better ways of waking up to reality. 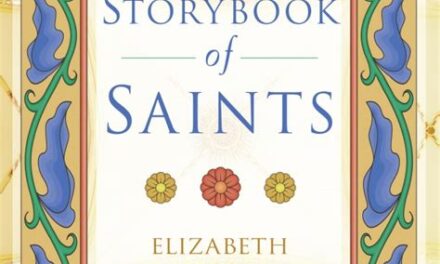 A Storybook of Saints by the Mother of Four Boys