The 1959 classic “Ben Hur,” winner of eleven Academy Awards, was a four-hour movie that might, on re-viewing, seem two hours long. The new “Ben-Hur,” a two-hour movie, may not seem four hours long, but it has the feel of something longer and slower than it should be if the number of times I looked at my watch is any indicator.

The older film, starring Charlton Heston and directed by the great William Wyler, is familiar enough to movie-buffs. Judah Ben-Hur, a Hebrew noble living in Jerusalem, meets with his childhood best friend, Messala, a Roman reared in Judea, after years of separation. The reunion, joyful at first, quickly sours as the grown-up Messala reveals himself a cynical soldier-politician, anxious to rise with the new empire. What he wants most from his friend is the names of seditious Jews in the city, a demand Judah refuses. When an accident occurs unhorsing the new Roman governor as he arrives in the city, the blame falls on the entire Ben-Hur family. A pitiless Messala hustles Judah’s mother and sister off to prison while Judah himself is sentenced to almost certain death in the galleys.

But he doesn’t die. During a spectacular sea battle, he saves the life of the Roman admiral Quintus Arrius who, in gratitude, adopts Judah—now young Arrius. The new Judah leaves the fleshpots of Roman society and then comes upon Sheik Ilderim, a wily but more or less good-hearted Arab who aspires to race his horses in the circus in Rome. As it happens, Judah is an experienced horseman who soon rises to victory and inevitable fame as a champion charioteer, setting the stage of the climactic race with Messala in Jerusalem under the watchful eye of Pontius Pilate. Judah, his identity now revealed, wins, and Messala, a thoroughly nasty competitor, crashes and is trampled almost to death. In his dying breath he tells Judah that his mother and sister are alive in the valley of the lepers. Judah with his beloved Esther mercifully bring them out of the valley, and their miraculous healing draws the story to an end, with Judah, Esther, and the family looking ahead to a new life.

Did I omit anything? As a matter of fact, yes. General Lew Wallace’s book and the 1959 film begin not with Judah and Messala but with the nativity of Our Lord. Throughout the story, the “Tale of the Christ,” Wallace’s and the film’s original sub-title, is punctuated with appearances of the Lord: the cup of water he offers Judah in chains; the Sermon on the Mount; and the crucifixion itself, which Judah witnesses. The healing of Judah’s mother and sister (in the film, that is) occurs at the foot of the cross, and Judah, who recalls his meetings with Jesus, feels the “sword drop form his hand.”

As for the new version, I will not be the first to wonder why anyone would go to the trouble of a re-make. Even though Wyler’s version took its share of liberties and left the story of Ben-Hur’s traveling to Rome to help fellow persecuted Christians, it followed Wallace with sufficient fidelity, about as much as “Gone With the Wind” and “Captain Blood” followed Margaret Mitchell and Raphael Sabatini.

Not so the 2016 “Ben-Hur.” In the new and no-so-improved version Messala is Judah’s adoptive brother, both of whom the viewers meet at the start as they joyfully but recklessly race their horses in brotherly sport. Although Messala is still Roman to the core, he is much more sympathetic than in the original. He clearly loves Tirzah, Judah’s sister, who from all appearances requites his love, but Hebrew mommy dearest will have none of it.

In no time Messala is a de facto outcast from the household and leaves to make his way through the ranks of the Roman army. In the course of his career, we meet some of his thoroughly rotten fellow officers, as well as an especially cruel, martial, and, oddly, ever-present Pilate—odd because Pilate, from historical accounts, did his best to stay clear of Judea, preferring the seaside.

Unlike the book or the classic film, Judah first encounters Christ before his sentencing to the galleys, meeting Him as a carpenter in Jerusalem, manifestly against the Biblical record since it should have taken place in Nazareth. The venue is no accident, for He appears again in the same city where he apparently lives and works.

The things that don’t change are largely disappointing. The clash of the Roman and Macedonian navies loses its majesty, a fault I lay at the feet of CGI, for my money an imperfect medium that is neither real nor animated, inviting, as the style now seems to dictate, close-frame shots with a strangely rickety quality, almost akin to watching kings, queens, and jacks flip by in a thumbed deck of cards. It mars the sea battle, a brief land battle scene (in Messala’s rise to prominence), and the chariot race—all told, a visually bizarre technology that sadly seems here to stay.

Quintus Arrius, the admiral who adopts Judah, disappears from the plot and with him the storyline of Judah’s fame in the Roman circus. Instead Judah washes ashore after the battle to find himself in the hands of Sheik Ilderim, played rather smugly by Morgan Freeman, who looks less sheik than dreadlocked Rastafarian. After a few turns with the horses, Judah is ready to face “brother” Messala in the newly constructed Jerusalem circus. The race has all the spills and chills that CGI can offer, but, predictably, it stretches credulity. In the 1959 version, Judah is almost thrown from his chariot. That’s not good enough in 2016 where “almost” simply doesn’t cut it, and the hero is dragged—not literally, folks: this isn’t Yakima Canutt; it’s CGI—by his horses as he hangs desperately to his reins as Messala’s black horses thunder inches behind.

Needless to say, he survives and wins, but a mere crossing of the line in first place violates contemporary taste; he crosses the line first all right, but in a thorough smash-up of his own chariot. Happily, the rules allow the victor to finish in less than one piece. Messala, as one might expect, runs afoul of his own horses, but he lives albeit minus one leg. He and Judah make peace, and the film ends with the two “brothers” racing, mutatis mutandis, as they did at the beginning—another concession to current taste, I suppose, which nevertheless compromises its best efforts to highlight a Christian message of love and forgiveness. Friendship is a great thing, but isn’t the power of the Gospel somewhat superior?

The film’s greatest misstep is that it omits the Nativity. Not only that, it jettisons Wyler’s beautiful iconography of the blood of the cross trickling down in the rain, which then flows into streams, then into rivers, then to the sea, a symbolic washing of the world’s sins as well as of Judah’s mother’s and sister’s leprosy. I don’t recall the scene from the book, but that doesn’t diminish its power. The new version would have done well to retain it.

Nothing I’ve said can be construed as a recommendation of the new Ben-Hur, but I won’t say it is devoid of entertainment. I’m tempted to rank it as a guilty pleasure, but my appetite for guilt will have to increase before I watch it again. 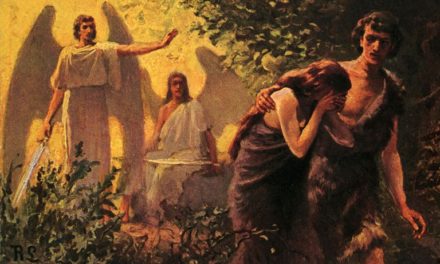 An Orthodox Spiritual Father Points the Way to Life in Christ

When Mary Returned to Egypt: The Apparitions at Zeitoun