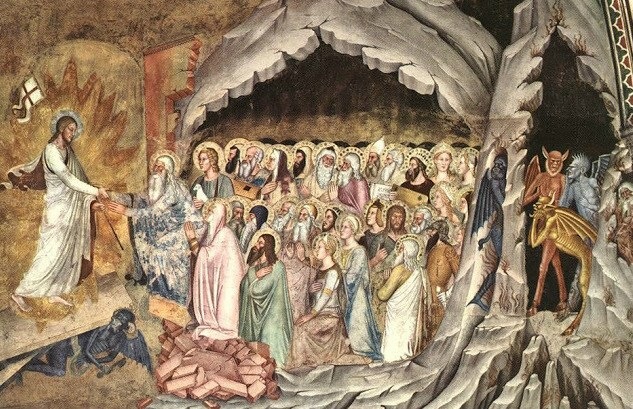 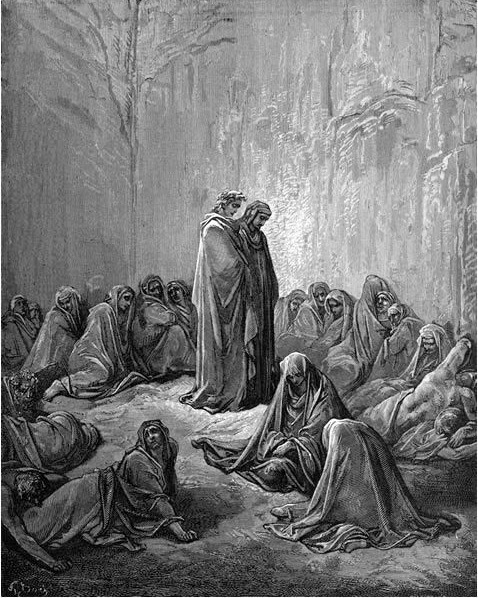 His squint is fixed on only one.
Cold-hearted, he, without esteem,
Creeps forth until his duty’s done.

Another meets him on the way,
As different as youth from age,
Or even life from death, they say.
His book is fingered to a page.

“My Lord, together we shall go
In secret, unexpectedly.
Like drying trees that cease to grow,
The time is fit for destiny.”

“I called you here.  The hour has come
To judge aright intent and act,
Collect the lot and weigh the sum,
Relying on the truth and fact.”

Not far away, a couple dines.
With hand in hand, they thank the Lord,
For blessings more than steaks and wines,
The many things they can afford.

They thank the Savior of their souls,
Who guarantees eternal life,
But then arrive their salad bowls.
They reach, at once, for fork and knife.

At home again, they feel relaxed,
Unwinding with tranquility,
But suddenly their nerves are taxed.
They suffer dreadful tragedy.

Amanda on the floor lies still.
There, Calvin finds his smitten wife,
Then calls for help.  Her vitals nil,
He begs the Lord to spare her life.

The Reaper knows the choice is made. 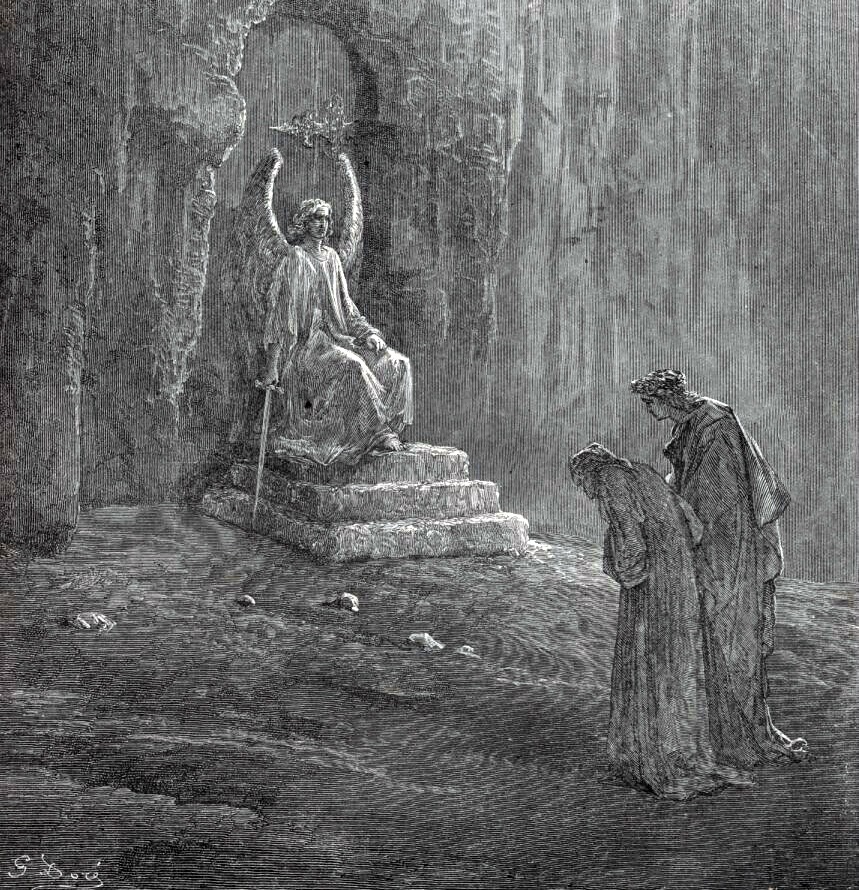 The will and plan of God are set.
He shrouds her soul in sheets of shade,
Without a question or regret.

Ethereal, she sees a light,
In which she understands her heart,
Her life-long deeds both wrong and right,
The reason why she must depart.

“Again you’ll see Me in due time,
When ev’ry penny has been paid,
Your thoughts sufficiently sublime,
Then restitution will be made.”

The Judge’s verdict sears her heart.
Expecting to go through the Gate,
She feels as if a fiery dart
Has pierced her through.  It seals her fate.

Quite soon, her bodily remains, 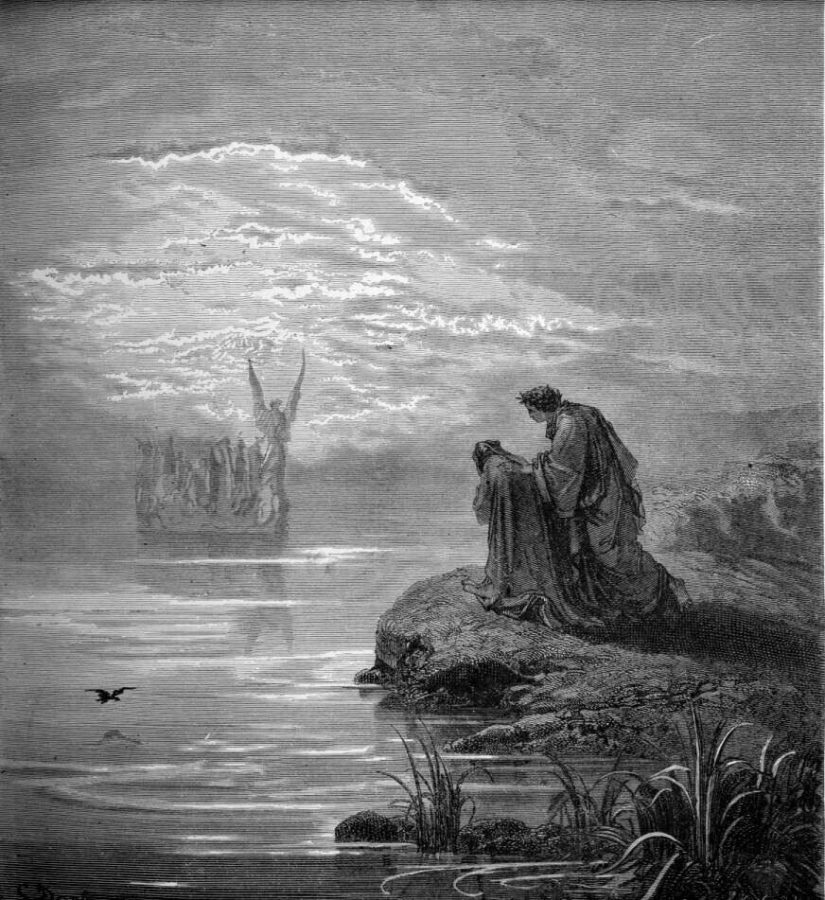 Without a ritual or prayer,
Lie vaulted, ashen as cremains,
While mourners go bereaved elsewhere.

They gather in the meeting hall,
As Pastor Bill shakes each one’s hand.
His eulogy based on Saint Paul
Assures them of the Promised Land.

They celebrate her sweetest traits
And fancy her on streets of gold,
But can’t imagine that she waits,
Amending will and thoughts untold.

Memorials help those who live,
Providing naught for harrowing.
The needle’s eye just like a sieve
Strains bad while good delivering.

So Catholic friends have Masses said 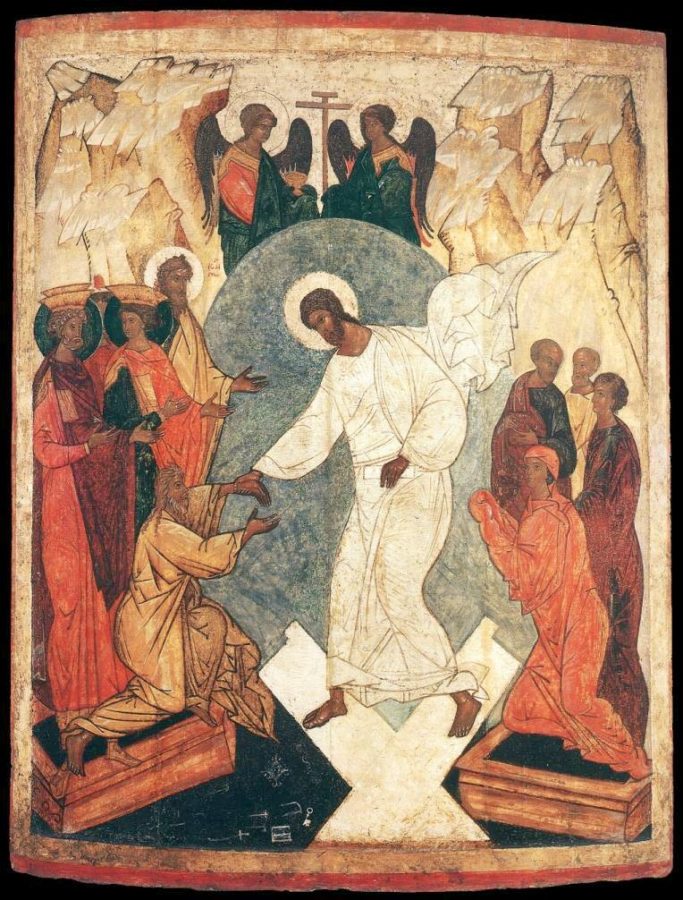 As reparation to be paid.
They offer prayers for the dead.
Departed faithful need their aid.

Unlike the Purgatorio
Of Dante, these veracities,
Despite unknown scenario,
Engender haunting memories.

Each moment understood at last…
How errant some volitions were.
Although she cannot change the past,
She rises from this bitter myrrh.

External senses now have ceased,
Yet she perceives within her mind,
That, yes, her soul will be released,
No more by heavy weights confined.

Perfection yet to be attained,
With layers left to be unfurled,
Her soul is cleansed while still detained,
Within the timeless Netherworld.

This state between eternity 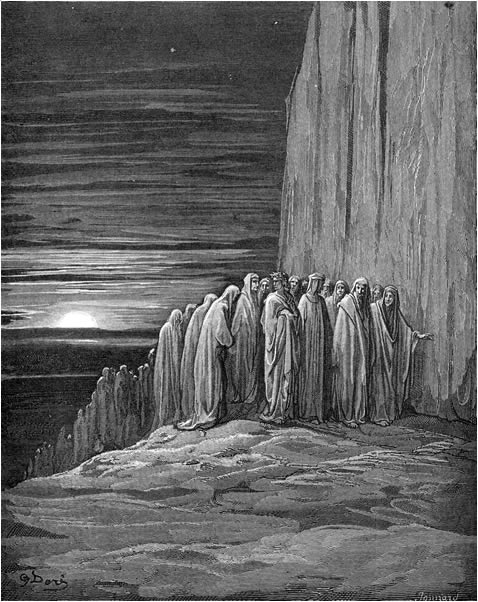 And time, however short or long,
Endures between ubiquity
And place to keep a ghostly throng.

These silent ones do not engage,
Yet rectify relationships
With persons of a cryptic age,
Throughout this faint prolonged eclipse.

Her angel takes her, then declares,
“Behold, the City of the Lord.
When all the wheat’s been threshed from tares,
Your soul with ease this moat will ford.”

“Some souls approach by swifter course.
Their debt is paid by loved ones left,
Whose intercession has great force,
A treasure doled by those bereft.”

“In hallowed cloisters one bell tolls.
Each dying ring reminds them all
That splendor for departed souls
Recited Psalms do not forestall.” 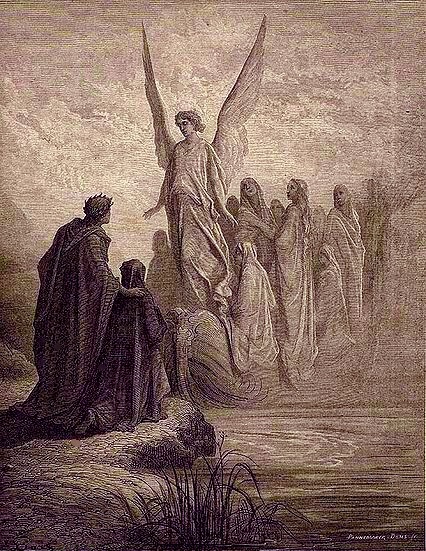 As when some lay beneath their feet.
With De Profundis they implore
For their necrology replete.”

“The Sacrifice that matters most
Christ offers through His chosen priests,
As consecrated Wine and Host
For grace in hearts like dough with yeast.”

“Our Lord descended to the dead,
Releasing friends from ages past,
For whom His Precious Blood was shed.
Now others are discharged at last.”

“November second is for those
Who have no one to pray for them,
That to Beatitude from woes,
They harbor nothing to condemn.”

“As wreathes are placed on sepulchers,
The circle of unending bliss
Is nigh, though Death himself demurs;
Christ summons from the gray abyss.”

“Behold, at last, the Narrow Gate, 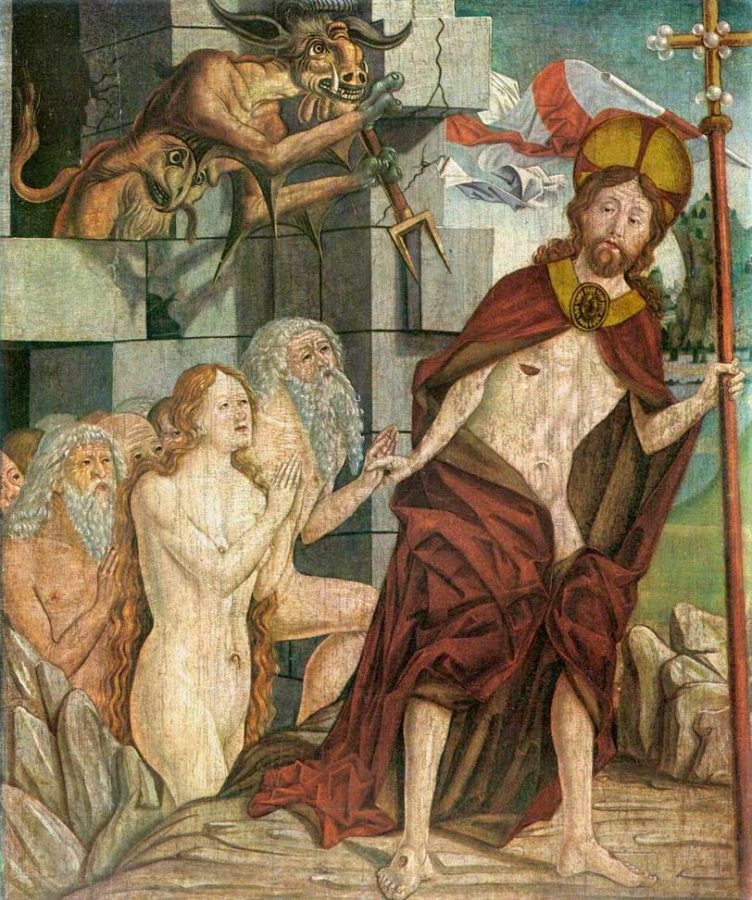 Through which the unencumbered pass,
To nuptial feast with godly Mate,
The consummation of the Mass.”

Saint Peter greets her with his key,
Which his successors all have shared.
Christ granted them authority,
The holy office each has chaired.

“I recognize you in your role:
To hold the Truth that sets us free,
The Gospel that now saves my soul.”
“Then, welcome daughter.  Come and see.” 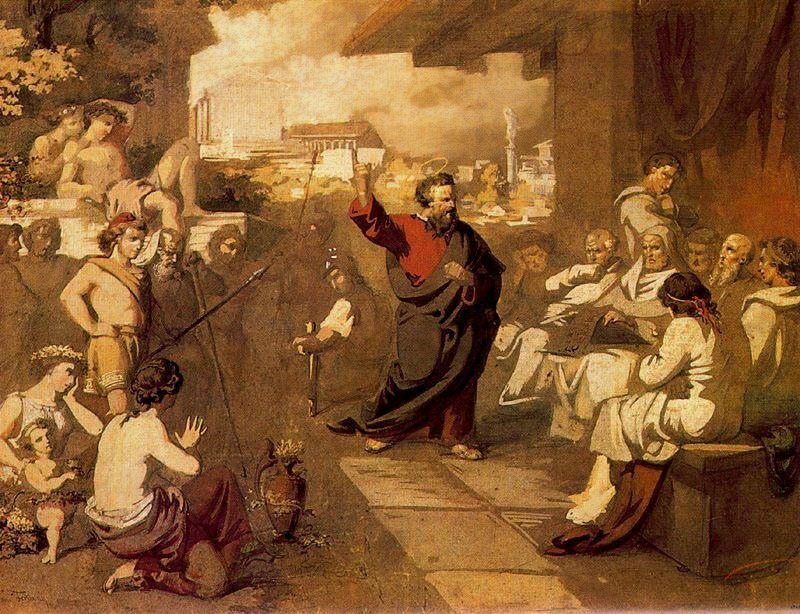 Illness as Blessing and Opportunity: Jean-Claude Larchet’s “The Theology of Illness”