The Power That Makes Us Small

The new Miss U.S.A., Deshauna Barber, a twenty-six-year-old Miss District of Columbia and a U.S. Army officer, when quizzed at the pageant about women in combat declared, “As a woman in the United States Army, I think … we are just as tough as men. As a commander of my unit, I’m powerful, I am dedicated . . . Gender does not limit us in the United States.”

On the other side of the Atlantic, a number of the actresses involved in the concluding season of the television series “Mr. Selfridge” assessed their experience in the show as one of feminine empowerment. The Black Lives Matter movement that emerged post-Ferguson is little more than a revival of the Black Power Movement of the sixties. And, as I can testify, college professors nowadays must plod through altogether too man papers on Shakespeare, Chaucer, Dostoevsky, and Homer that draw one major lesson from some of the greatest works of world literature, namely, the lesson of empowerment, invariably of one of the politically certified (read: by the left) classes, races, or sexes.

To an ever-increasing number of citizens, academics, politicians, and students this state of affairs is exactly as it should be.

But for someone whose education was and continues to be a matter of understanding great books, great events and great men with respect to how they expressed, depicted, and fostered a climate of virtue or vice, humility or hubris, order or discord, devotion or rebellion—to name a few rather quaint considerations that have traditionally justified an active and contemplative life—power was simply a means by which the good might be achieved by, not too surprisingly, men of good will, or thwarted by those with evil in their hearts.

It’s distressingly clear that today power is an end, perhaps the only end, of existence. If that’s true, we’ve come a long way from the world Plato, Augustine, Dryden, Johnson, Coleridge, Arnold, and even Orwell. How on earth did we get from A to the abyss?

The usual tar baby is Nietzsche, he of “the will to power” fame. The charge may be fair enough, but the reasons for saying so are more complex than those only casually familiar with him may think. Common assumptions that Nietzsche was both an anti-Semite and a German nationalist—in other words, a proto-National Socialist—are poorly founded once one has done a little reading. Nietzsche, in fact, called himself an anti-anti-Semite and tended to be sarcastically dismissive of those itching to sing “Das Lied der Deutschen.”

When I taught Beyond Good and Evil in a graduate seminar on late modernity, some of my students, once they got Nietzsche’s drift, insisted that he should not be blamed for the Nazis, a point that might seem evident to those who have read him. I have a feeling he would have despised Hitler. Allowing the justice of the objection (which, in any case, was something I had taught them), I nevertheless told them that we couldn’t let Nietzsche off the hook that easily. After all, if one contends, as he did, that every proposition, every theological and philosophical claim, is questionable right down to its first principles, and that all one can say about man is that he is either a weak or strong agent of his own power, one shouldn’t be too shocked to wake up one bright dawn and find the world a safe haven or, worse, a blood-drenched playground for Hitler Youths, Stalinist Pioneers, and Maoist Red Guards.

What Nietzsche wanted to happen is anybody’s guess, but the elevation of pure power as the one laudable goal in life is bound to have serious effects on the way people conduct themselves.

Where once men and now women joined the armed services to serve their country even to the extremity of giving their lives for it, they now join to celebrate their power. The phrase “Duty, honor, country” that Douglas MacArthur recommended to West Pointers in his last address to them before his death has been relegated to the status of an afterthought—provided, of course, that it isn’t inherently racist.

An actress doesn’t perform to entertain and realize the qualities of the character in the larger canvass of a play and, hence, its meaning; she acts to vicariously feel the weight of domination shift in her favor.

A student of literature doesn’t plumb the depths of a given character to discover whether he is courageous, just, charitable, or true, but whether he’s an agent in search of the power that is his birthright, according to which standard, by the way, Iago is worthier than Othello, and the “plain dealing villain” Don John of “Much Ado About Nothing” more laudable than the clueless but honest Don Pedro.

Nietzsche’s time bomb was to make faith and virtue so questionable as to render them untenable; he thereby created a void in the soul of man—a soul he denied—capable of nothing but the exercise of power or the failure to do so. That view of man is in the academy, the Hollywood studios, the halls of government, and, sadly in this election year, on the hustings. America and, by extension, the West have many ills but none as dire as the temptation of pure power.

Some fifty years ago at another beauty pageant, then for the crown of Miss America, one of the contestants was asked to choose from a group of virtues one that was central in her life; the virtue she chose was humility. We needn’t guess what the “virtue” would be today because there’s only one, but Nietzsche’s claims notwithstanding, we are not stronger and, as he liked to say, harder for the pursuit of power, but empty, weak, trembling, little people. Like Satan early in Book I of Paradise Lost, we talk big but are chained flat on our backs on a lake of fire, not so much a picture of humility as of humiliation and, truth be told, irony, something even Nietzsche himself might have appreciated. 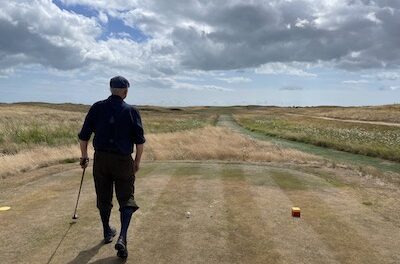 My Son, The Gorilla — A Memory of My Father

The Left’s Immigration Riddle: Welcome to the “Wicked” United States