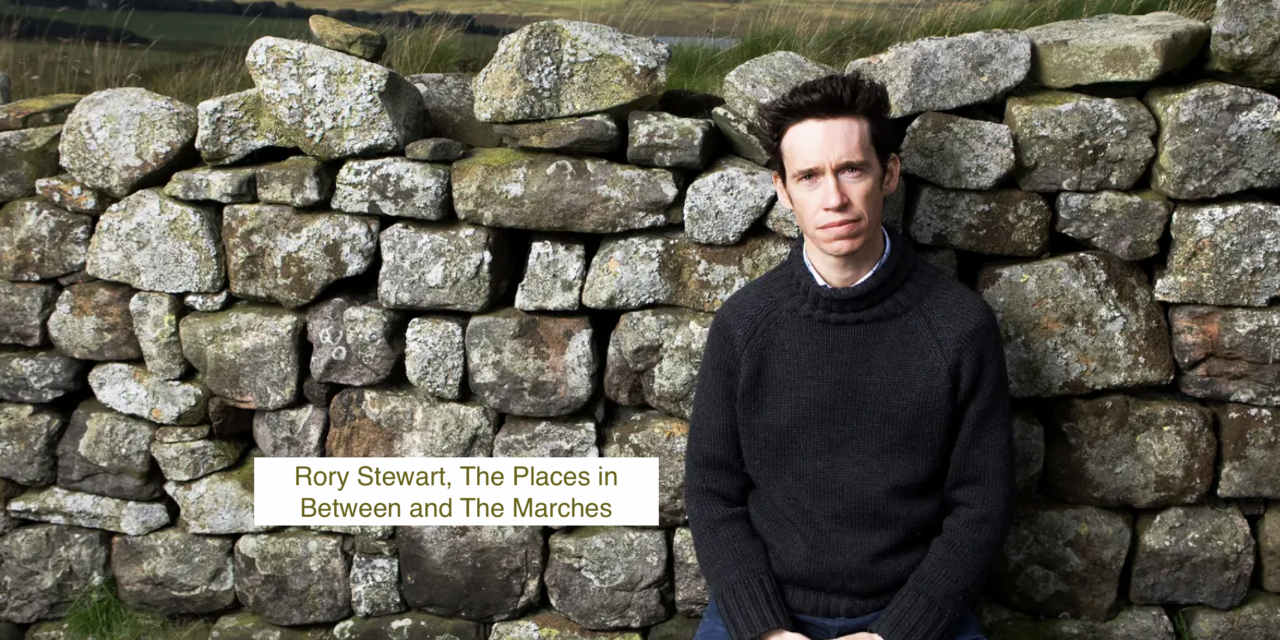 As Deal noted in his article “My Five Best of 2022 — Books, Movies, TV, and Golf Shoes,” it’s always a pleasure to compile a list of “bests” for the benefit of readers, especially as we approach Christmas.

But the fact is, almost none of the items I have listed below qualifies as a “Best of 2022.” They’re all, save one, from previous years and even previous centuries. But no matter. With the internet and its blessings, things long out of print or off the air that failed to catch my attention when they were new prove easy to find and, really, as good as newer stuff. Therefore, here is a list of bests for all years and seasons, well worth consideration in the here and now with Christmas looming.

The Places in Between, by Rory Stewart (2005). I have nothing against a two or three-hour hike provided the weather is fine and the terrain manageable. Rory Stewart (historian, ex-civil servant, and former MP) is much more ambitious. He hiked across Afghanistan in 2002, not long after the Taliban fell from power (and before regaining it rather infamously). As he notes in his preface, he’d already spent “sixteen months walking twenty to twenty-five miles a day across Iran, Pakistan, India, and Nepal.” In Afghanistan, he is escorted part of the way by government soldiers, a rough, often untrustworthy lot whom he must regularly bribe, and accompanied by a gargantuan dog he adopts on the way and names Babur. The manifold dangers from humans and the elements will surprise no one; the variety of village cultures with their strange loyalties and beliefs may. This is a wonderful tale—a true classic of its kind—of determination, adventure, courage, curiosity, and survival. I listened to it as an audiobook read by the author, a superlative reader by any standard.

The Marches, by Rory Stewart (2016). Did I mention that Rory Stewart enjoys hiking? The journey that unfolds in this book (which I did read in print but intend to listen to just to hear Stewart imitate the various characters he met on the way) follows a path roughly from Newcastle to Solway Bay, then cutting northeast to Stewart’s home on the borderlands between England and Scotland. His intention was to travel with his aging father, but (age is no joke!) Brian Stewart chose to hike very little, preferring to rendezvous with his son at various locales for the first half of the trip, and then communicate with him from home for the second half. Part of Rory’s goal is to discover the identity of the men and women of the borderland (aka the Marches), chiefly by following Hadrian’s Wall, a task he manages about as well as any man could. But the various meetings and emails from his father give the book a second but hardly secondary purpose, that of understanding his father and what may be regarded as the last generation of the Empire. The story is a fascinating and poignant reflection on history, modernity, and family.

A Spy Among Friends: Kim Philby and the Great Betrayal, Ben MacIntyre (2014). I first heard of Kim Philby when I read Malcolm Muggeridge’s memoirs many years ago, and although over time I learned more of the well-rehearsed basics of who Philby was, I doubt anyone can tell the story better than former Times (of London) reporter Ben MacIntyre. Author of numerous books, espionage is his great theme, and with Philby he has perhaps his greatest and most notorious subject. For those who don’t know him, Philby was the son of a Middle Eastern scholar and diplomat, a Cambridge graduate reared to join the “old-boys’” network in the foreign or secret service (MI6). Indeed, that is just what he did, serving his country for decades. Trouble is, he was a dedicated communist from his Cambridge days, recruited by the NKVD (later the KGB). How he succeeded in bamboozling his fellow spies in MI6 and their American counterparts in the OSS and CIA is essential reading, particularly for those who don’t believe there were any commies “under the rug” in the Cold War and earlier.

Journal of the Plague Year, by Daniel Defoe (various publishers). A partly fictional, partly historical account of the arrival, progress, and abatement of the plague in London, year 1665. After Covid-19, it’s almost a relief to read about people who had it much worse: seventy to one hundred thousand deaths in less than a year and in one, albeit large, city. Harrowing, eloquent, and notably Christian in tone. ’Nough said.

“Doc Martin” (BBC video; Amazon Prime; Acorn Media, 2004 to 2022). Years ago, I watched one episode of “Doc Martin,” starring the talented Martin Clunes. I enjoyed it but, for reasons I cannot recall, didn’t watch it again until recently. Thankfully, my Acorn subscription in Amazon Prime carries the entire series, which is completing its tenth and final season this year. The show is quirky, partly because of its setting, Portwenn (in real life, Port Isaac) in Cornwall, which has its share of eccentric characters. But the most eccentric of all is Dr. Martin Ellingham himself, immediately dubbed Doc Martin, a famed surgeon who, for reasons both curious and mysterious, comes to the village to become its GP. He’s gigantic of stature, with a bad habit of banging his head on low doorways, something he does early in episode one when he turns to get a second look at the lovely Louisa Glasson (Caroline Catz), a member of the board that has just interviewed him for the job. Height isn’t his only problem. All business to the point of rudeness, he’s utterly incapable of sympathy (no bedside manner here) for his patients and completely lacking in humility, humor, or just about any other endearing trait. Case in point: later in the series, when someone reminds him that he must be examined by a board of his peers, he curtly responds, “I have no peers.” Case closed. He hates dogs too. Nevertheless, Louisa and Martin grow fond of one another; the plot-driving question inevitably must be whether he can lower his carefully built defenses to allow love to flourish. The show has become a hit on both sides of the Atlantic for good reasons; watch it, buy it, or both.

“Peak Practice” (Amazon Prime, 1993 to 2002). Maybe this series never aired in the U.S. If it did, I missed it, but I’m making up for that now. Yes, it’s another doctors’ drama/comedy. Dr. Jack Karruish (Kevin Whately, “Inspector Morse,” “Lewis”), after a four-year stint in Kenya, returns to England and joins a small medical practice run jointly by Drs. Beth Glover (Amanda Burton, “Silent Witness”) and Will Preston (Simon Shepherd, Henry V etc.). The Derbyshire village looks idyllic, but this is the modern world, and the various conflicts make for a series of crises that often compromise Jack and the practice. Not so funny, huh? But this is a comedy, at least in the Shakespearean sense, because the question looms, Will Jack and Beth find happiness together? Their attraction is almost immediate, and they are quickly drawn together, except when the strains of operating the practice threaten to short-circuit the progress of true love. Like the new “All Creatures Great and Small,” this series has its share of melodrama, but what else is ninety-nine percent of TV about anyhow? And unlike “All Creatures,” there isn’t a “Peak Practice” series of novels—not that I’ve read—so I can’t complain about how poorly they’re realized.

Claudio Arrau, “The Complete Warner Classics Recordings” (2022). At last, something on my list that is new. Twenty-five discs of piano music from the great Chilean pianist is anything but overkill. Arrau is perhaps not as well-known as Horowitz or Rubenstein, but he’s every bit as good. A romantic to the core, he is expert in Beethoven (wonderful sonatas), Chopin, and Brahms, and unlike some of the artists of today—frequently semi-literate hotdogs—Arrau loved to spend his free time reading and gardening. The set begins with older recordings (dated sound but listenable) that showcase a young, energetic Arrau, while the later stereo pressings provide an expansive look at the more comtemplative, mature artist. We may be glad to have so much of his work. If you don’t know him, don’t miss this.

J. S. Bach, Sonatas for Violin and Harpsichord, Vols. 1 & 2 (Analekta). Canadian violinist James Ehnes and harpsichordist Luc Beauséjour recorded these works by Bach nearly twenty years ago. Delightfully melodic and ingeniously inventive (after, they’re by Bach), these performances are as good as it gets. And while I’m on the subject of Bach and Ehnes, he recorded the solo sonatas and partitas for Analekta also many years ago and again during Covid lockdown (on the Onyx label). Either version will do. For some reason, I prefer Ehnes over Rachel Barton Pine’s excellent recording on Cedille. Can’t say why. Is Ehnes better than Milstein? Hmm.*

Wolfgang Amadeus Mozart, The Complete Symphonies, Karl Böhm/Berlin Philharmonic. These recordings date from the sixties (on DG): well-engineered performances on modern instruments. If the complete symphonies seems overkill, the latter major symphonies are available much cheaper (also on DG). As with Bach, further praise is unnecessary.

After trying golf for about five years, I realized I was paying good money just to get mad. I quit, sold the clubs, chucked the shoes, and never looked back.

*Editor’s note — No one is better than Milstein!