Self Made: Inspired By the Life of Madam C. J. Walker: Perhaps Too Inspired?

Just in case you hadn’t noticed, it’s Black History Month, and not a few TV shows are airing dramatizing the experiences of that segment of our population. Many sport the claim “Inspired by true events.” The Netflix Original “Self Made: Inspired By the Life of Madam C. J. Walker,” which aired last year, soberly advertises its truthfulness in just this way—as a kind of inspiration—and it does use some well-documented facts to weave a story of a famous black American woman entrepreneur.

But on occasion, it wears its “inspired” label a bit too confidently and carelessly. That’s another way of saying “Self Made” does not always hold to the absolute, historical truth—but more on that later.

The real Madam C. J. Walker was born Sarah Breedlove in 1867 in Louisiana, the first of a large family legally out of slavery. Being free might have been a blessing to the family, but it didn’t guarantee an easy life. Married at fourteen, Sarah bore a daughter A’Lelia, was widowed at twenty, moved to St. Louis, and found work as a washerwoman at a dollar a day. Second and third marriages followed, and from husband number three she launched her identity as Madam C. J. Walker.

That’s a succinct way of plotting her progress from poverty to riches. The passive “was promoted” to the active and reflexive “promoted myself” tells the tale almost by itself.

How did she become, as the series argues, the first woman millionaire in the U.S.? By selling hair products. From her own and other blacks’ experiences, she knew that commonly-used harsh soaps were damaging black women’s scalps — to the point of partial baldness in her case.

Her brothers, who were barbers in St. Louis, gave her tips on hair care, which she put to good use: first, in working for Annie Malone, an African-American vendor of hair products, and, later, in developing her own similar formulas for black women. The products sold, she hired young blacks as saleswomen and opened a factory as the Madam C. J. Walker Manufacturing Company.

The establishment of her own hair salons eventually followed. Soon she counted former slave Booker T. Washington and the black crusader (and dedicated leftist) W. E. B. Du Bois among her acquaintances. After her death in 1919, daughter A’Lelia headed the company.

Does the four-part series match the reality? To be fair, it probably couldn’t. Nevertheless, it tries gamely to convey some sense of the miraculous rise of this determined woman. Even though a good deal gets compressed, no one would expect the writers to trace every step of such an eventful life.

But it’s the “facts” the creators of “Self Made” spin out of whole cloth that will gall anyone who digs behind the scenes. In the series, Walker’s main rival, “Addie” (Carmen Ejogo), based on the real-life Annie Malone, hires “Sarah” but dismisses her ideas about sales and manufacturing as absurd.

Left out of “Self Made” is the inconvenient fact that the real Annie Malone was a millionaire before “Mrs. C. J. Walker” and had a successful shop in St. Louis. She isn’t the only historical figure to suffer from outright distortion. When Booker T. Washington comes to town, Walker actively courts his favor, hoping to gain an endorsement. To her horror, he turns out to be a male chauvinist brute who naturally thinks women have but one place, the kitchen.

Significantly, “Addie” and Washington are played by actors of mixed race who appear virtually and symbolically white. Not so with DuBois, who dismisses Washington as an Uncle Tom and blesses Sarah’s efforts.  As for daughter A’Lelia, she discovers her inner lesbian after her marriage fails — an absolute fabrication. But, hey, if you’re going to celebrate blacks and women nowadays, you may as well throw in a lesbian to certify how broadminded you are.

Such shameless pandering to the brahmins of PC culture doesn’t entirely ruin “Self Made,” but it misleads and distorts unnecessarily what is a good story in its own right. Seeing it will acquaint many with the life of the remarkable Mrs. C. J., but it may also remind a few (sadly, too few) that a series “Inspired by true events” isn’t as true as it claims. 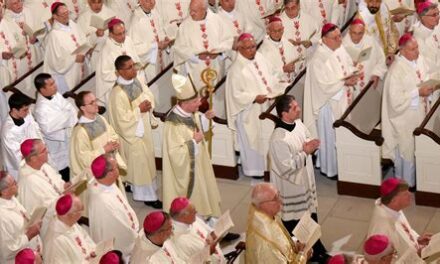