All Creatures Great . . . and Smaller — A Review 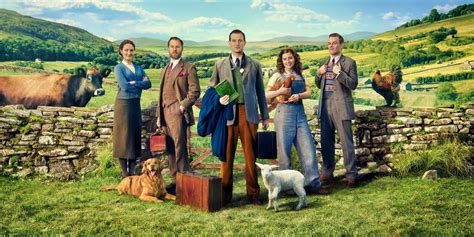 All Creatures Great and Small is the first of five books, partly memoirs but mostly novels, about the experiences of “James Herriot,” pen name for James Alfred Wight, a British veterinarian in the Yorkshire Dales. Published in this country in 1972, it was an immediate success, as were the subsequent books. Largely and perhaps necessarily episodic, the story plots the daily adventures and misadventures of its hero, involving the births (sometimes difficult) of various farm animals, the euthanizing of beloved pets, occasional unexpected revelations about treatments, and bouts with recalcitrant and often stingy Yorkshiremen.

The characters are memorable, in many ways almost worthy of one of Wight’s favorite authors, P. G. Wodehouse: Siegfried Farnon, the eccentric vet whose assistant James becomes; Tristan, Siegfried’s hilariously reprobate brother and assistant; Helen, a Dales girl with whom James falls in love; Mrs. Hall, the trusty and crusty housekeeper; and a cavalcade of colorful Yorkshire farmers and tradesmen.

If you imagine this delightful hodgepodge sounds like something that would attract a screenwriter—at least for the small screen—you’d be right. By 1975 a TV movie All Creatures Great and Small appeared in the UK and US, starring Simon Ward as James and Anthony Hopkins as Siegfried—good choices for both roles. But it soon became obvious that the proper vehicle for Herriot’s books was the series, and in 1978 the BBC launched it under the same name as the first book.

It ran three seasons, taking Herriot up to World War II. After a hiatus of eight years, the A&E network produced four more seasons with almost the same cast but not based so strictly on Herriot’s actual stories. All told the series has ninety episodes, with Christopher Timothy as James, the great Robert Hardy as Siegfried, Peter Davison as Tristan, Carol Drinkwater as Helen (replaced by Linda Bellingham in the A&E years), and Mary Hignett as Mrs. Hall.

For what it’s worth, in my experience few series have proved so consistently delightful.

Although I would have been content with All Creatures as it was—I own the original three seasons on DVD—I should have known that after thirty years, a new All Creatures would, Phoenix-like, rise from the ashes of the old. It has and is showing now on PBS Masterpiece. However, unlike the Phoenix, the renewed bird has somewhat different plumage.

Of course, no one is going to tamper too much with Herriot’s basic story: young vet goes to Yorkshire, becomes assistant to Siegfried, experiences the ups and downs of life as a vet in the Dales. Tristan, Helen, and Mrs. Hall are all there, along with secondary regular characters, such as Mrs. Pumphrey, a rich widow who regularly spoils her Pekinese Tricki Woo nearly to death. Really, no one needs to tamper with it at all, but the directors and writers do, without improving anything.

In the books and the original series, James comes to “Darrowby”(a fictional composite of two Yorkshire towns) in answer to an advertisement for an assistant. At the door of Skeldale House, he meets Mrs. Hall, a woman the first book describes as around sixty—and in those days, sixty might very well have looked seventy today. Here’s where the mischief in the new series begins.

Of the new Mrs. Hall I can only say, sixty should look so good (Anne Madeley, the actress, is forty-three—and doesn’t look a day older). Far from the grumpy but lovable Yorkshire woman of the books and older series, she is more Minerva of the Dales, dispensing sage advice as readily as Siegfried and James dispense pills. She plays Scrabble with Siegfried even as she lessons him on treating James more kindly, and, all in all, acts more like a wife than a housekeeper.

As for Siegfried, Samuel West’s realization does not lack skill; I assume he plays him as written in the script. Although, like Hardy, he’s a constant frustration to James, West is more irascible, sometimes flatly unjust, and less humorous. Case in point: James’ initial interview proves successful in the book and original series, and that is that. Too boring?

The writers of the new series have James get the assistant’s job, get drunk that night, and make a perfect hash of the next day’s surgery. Siegfried instantly fires him, much against (you guessed it) Mrs. Hall’s sympathetic protests. James must redeem himself by taking a midnight call meant for Siegfried in which he heroically exhausts himself in a difficult calving. Predictably, he is rehired, and the series goes on.

Rachel Shenton seems right enough as Helen, even in the correct wearing of corduroy pants on the farm, something the old series omitted. But James meets her on his initial trial (much too soon), and she is perhaps all too present in the early going, as well as seeming too much the Tomboy (driving a tractor, no less). Nicholas Ralph’s James is more than adequate, and he is a Scot, accent free of charge.

Tristan falls to Callum Woodhouse, fresh from his stint in The Durrells in Corfu. The choice seems perfect at first glance, but as with the other characters, the writers have tweaked the part slightly and not for the better. He is, correctly, a bum, but does he have to arrive from vet school hobo-style, sneaking a ride in the baggage car? Moreover, his hilarious entrance at Skeldale House is largely botched.

In the book and older versions, Tristan tells Siegfried he has failed one of his exams but done all right in another; the latter furiously banishes him from the house. As James tries to comfort the exiled brother, Tristan laughs and explains that Siegfried will forget all about it by morning. Actually, he failed both exams, but, he adds, he’ll pass next time. Too much of this is kept in suspense in the new series, and the comedy drowns in pathos.

You may gather that the problem with the new All Creatures lies in its tendency to create drama where it isn’t needed. Herriot’s characters always provided the main interest, and they were fine as they were without any fiddling or exaggerated crises. That doesn’t mean the series isn’t worth watching, but if, like me, you delighted in the books and earlier productions, you will heave more than one sigh of disappointment and maybe roll your eyes till your head aches. Watch, but ready yourself to make some (un)necessary allowances.

Fr. Benedict J. Groeschel’s Memoir: “What It Means to Know What Your True Duty Is, and To Do It”