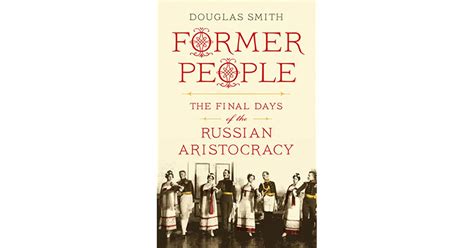 Former People: The Final Days of the Russian Aristocracy

Have you ever wondered what happened to the Russian aristocracy after the 1917 Revolution? I don’t mean the émigrés — they have their own story. I mean the ones who stayed behind. We know the remaining aristocracy died along with the Tsar, but exactly how it all went down remained a mystery until the hidden records came to light in 1989.

Douglas Smith brings their story to life in his book, Former People. He puts human faces on the events of the Revolution by following the lives of two extended families, whose members were a very diverse lot and held widely different opinions on the issues of their day. Some had been active reformers. A few even supported the Bolsheviks, at first. In the end, these distinctions were irrelevant, as they were all punished for their class membership regardless of any personal crimes or loyalties.

The Russian Revolution began on Thursday, February 23, 1917, when women textile workers went on strike. By the end of the day, about 90,000 had joined them on the streets. Over the next months, the uprising moved out to the countryside, with agitators working hard to fuel peasant rage. Land owners were forced off their estates, but often just incinerated in their burning homes.

Lenin returned that spring and was given a hero’s welcome by the Bolsheviks, sparking a coup and civil war that raged for seven years. There were so many factions and so many fronts, it was hard to know which side to side with. Many aristocrats ran back and forth across the country like rabbits in a cage trying to escape the violence directed against them.

In 1921, the Communists gained control of a devastated country, with nearly 10 million dead of disease, starvation, execution, and battle wounds. As far as Lenin was concerned, any of the old aristocracy who survived the civil war and remained in the country constituted a fifth column that had to be eradicated. It mattered not at all that these people had been utterly crushed and posed no threat. From the 1920s forward they would be hunted down, persecuted, and killed.

Many aristocrats, legally designated “former people,” were declared outcasts, stripped of their rights, deprived of their ration cards and cast out from the bare rooms they occupied. They were routinely interrogated, and young family members and grandchildren came to regard arrest as their right of passage into adulthood. Arrest could be followed by beatings and torture, exile, the Gulag, execution – or release. Most former people were incarcerated more than once and endured a variety of punishments. Very few died a natural death at the end of a normal life span.

You would expect people who had eaten only the best of European cuisine, and slept in beds where the finest linens were changed every day, would be bitter when reduced to eating nothing but potatoes and sleeping on vermin infested straw. But, for the most part they were not. They were not perfect human beings to be sure. Still, they met their fates with courage, pluck, generosity, patience, and, most importantly, faith.

Yelena Golitsyn is an example of this amazing grace under fire, whose grandson Nikolay Trubetskoy was interviewed by Smith in 2010. Of his four grandparents, three died behind bars. Only his grandmother Yelena Golitsyn died of natural causes at age 87. Smith asked Nikolay whether his grandmother talked much about her life and what had befallen her family. “Yes,” he said, “she did.” Yelena told him that 300 of her relatives had been killed by the Bolsheviks. He asked her whether she was still angry at their killers and whether she could ever forgive them. “I forgave them long ago,” she explained to Nikolay. “But I will never forget.”

The dustbins of history may be littered with former empires, but there are no former people. These eternal souls deserve to be remembered, and their lives shine in Smith’s compelling account of their fate.

The paperback of Smith’s Former People sells for $20 and can be ordered online from Eighth Day Books in Wichita, KS. Send your order to books@eighthdaybooks.com or visit the website, www.eighthdaybooks.com.

Jeri Holladay writes from Wichita, Kansas where she has been Associate Professor of Theology, Chairman of the Theology Department, founding Director of the Bishop Eugene Gerber Institute of Catholic Studies at Newman University and Director of Adult Education at the Spiritual Life Center of the Diocese of Wichita.