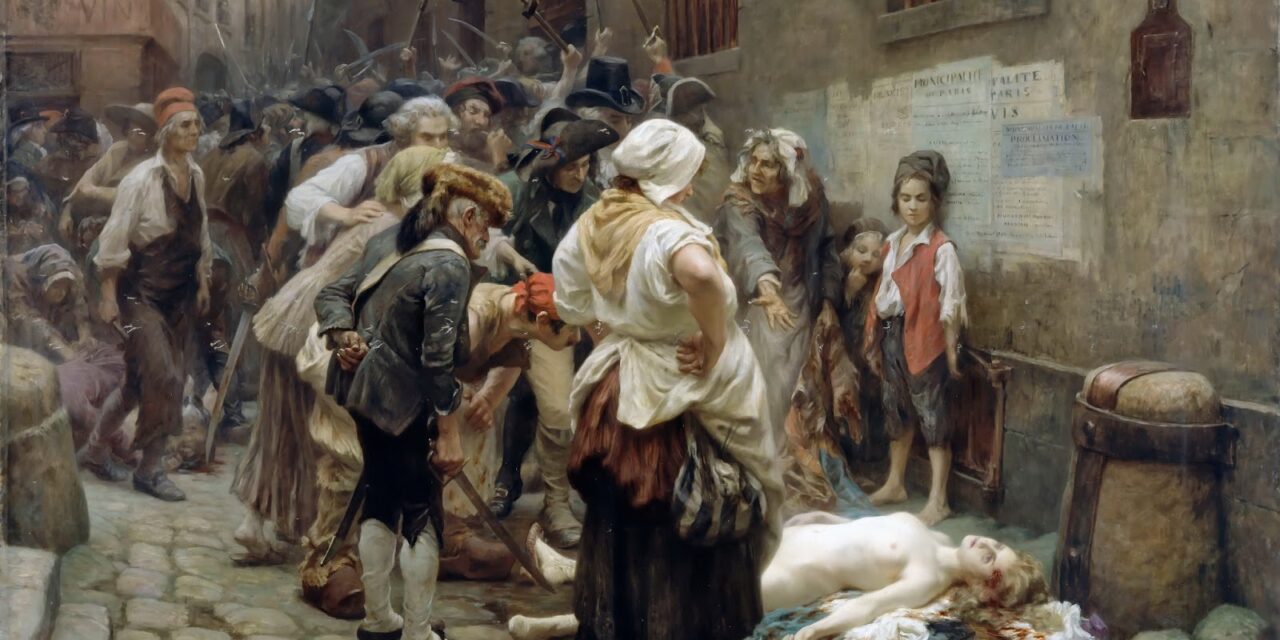 The painting Death of the Princess de Lamballe is rather stagy.  Trust me.  It is the clean version.

For the past 5 years, I’ve watched people encourage others to hate people they don’t know.  It is called calumny, lying about someone in order to destroy them.  A grave sin, calumny has become acceptable, even addictive.

It happens all the time on cable news and social media.  When I opened a Facebook account to contact art colleagues for a “master class”, I never imagined it was not a forum for the polite exchange of ideas.  I must admit, after being called “delusional” and a “sanctimonious ass” by “friends”, I was wrong.

As we enter the Pandemic Era, people are hoping other people will die.  Not people who are sick of quarantine and want to go back to work!  Not the sick joke calling the virus “Boomer Remover”, from people who don’t trust anyone over 60.  I mean people who want politicians to die so their political party can take over and form a one-party Socialist America which will give them something for nothing.

After months of escalating stories of horror and loss, with hope of recovery in sight, the news media eager for inflammatory narratives on racial injustice found the death of an unfortunate handcuffed man being knelt upon by a policeman a cause célèbre.  A cry to hit the streets with Antifa and force the man they love to hate into what they call a “bunker”, the White House.  The man who died in police custody, George Floyd, is barely mentioned now with daily reports of shootings of policemen, brutal beatings of anyone in the way, looting, burning, even a pet dog was shot.  Moving a safe out of Wells Fargo with a front end loader is radical chic.

Those neighborhoods suffering most from assault are African American.  Their city buses don’t run anymore and their food stores are empty shells.  The elderly cannot get food.

Those who own storefronts arm themselves with baseball bats like the Sikhs in the London riots did to protect their temple because the police weren’t around.  Politicians unaccustomed to dealing with Criminal Law call them “vigilantes” and encourage protestors to “stay safe”.  The same people who became frantic when they saw blue-collar workers protesting lockdown now praise throngs of young people seen throwing bottles at police insisting they are “peaceful protesters”.  Some no doubt want peace but not all.

Pyramids of bricks mysteriously appear on city streets inviting the violent to break windows.  All to teach us what?  Violence is wrong?  Using a false narrative to form an opinion about our fellow human beings to justify their abuse is wrong?

Martin Luther King said, “…, violence begets violence,…” Incendiary lies on the Twitter feed, based on anger and defamation, fed by a politically directed media heighten the violence and ratings.  Then feigned surprise when more people die.

Which brings me to the end of Nancy Pelosi’s grip on her gavel.  A movie of Nancy showing off her well-stocked supply of gourmet chocolate ice cream in a gleaming, expensive, stainless steel NASA fridge, a chef would die for.  The film guarantees a Republican win, whenever the next election takes place.  Nancy has only herself to blame.

Who would do a puff piece on gourmet dessert while families go hungry and many world-wide are dying of a painful heretofore unknown virus?  If the First Lady had done such a thing she would have been crucified.  Melania is crucified when she visits children in a hospital!

I mentioned a meme to a friend, a photo of Nancy eating a frozen dainty which said, “Let them eat ice cream”.  Thinking of Marie Antoinette, I said, “Quotes can kill.”  My friend thought people might believe Nancy Pelosi actually said it.  I don’t think Nancy is literary enough.

I refer to the original quote, “Let them eat cake,” falsely attributed to Queen Marie Antoinette.  Hardly averse to the poor, she funded charities for women, the hungry, and marginalized.  She brought women artists like Élisabeth Louise Vigée Le Brun into the French Academie, for the first time.

The quote, by an anonymous princess, was from a book by Rousseau, written when Marie Antoinette was a young girl before she went to France.  The quote was only attributed to her after her death to justify her end. She would have been horrified to be forever falsely quoted as saying let poor people eat cake they do not have.  Actually, the word in the quote is “brioche” not “cake”.  Bread made with eggs was a luxury.

Marie Antoinette had empathy for people which was revealed in a letter she wrote to her family in Austria during a flour shortage, she wrote, “It is quite certain that in seeing the people who treat us so well despite their own misfortune, we are more obliged than ever to work hard for their happiness. The King seems to understand this truth.”

They didn’t have memes then but they did have pamphlets.  More people could read or get someone to read for them than you think.  Indeed sound bites or cries were the only news many heard.  There were far worse things said about the King and Queen, their relatives, friends, servants, and even humble farmers.

The calumny has long been debunked.  The King and Queen were charitable, devout people who refused to let the Swiss Guards fire on the violent French mobs.  They were repaid when the mobs murdered the Guards and murdered them.

Marie Antoinette stumbled when led to her execution.  Her guard asked if she hurt herself and she remarked nothing could ever hurt her again.  Her husband had been executed.  At her trial, her little boy Prince Louis-Charles was forced to say she abused him sexually.

Prince Louis-Charles died two years later at age ten, kept like an animal, abused mentally and physically.  His sister could hear his screams while they beat him.  The physician who performed his autopsy was horrified at the scars on the child’s body.

His sister, the eldest, 17-year-old Marie Therese Charlotte, never speaking of her own torment, was party to a prisoner exchange and sent to Austria.  She wrote of her sorrow on the wall of the prison and asked God to forgive the people who made her family suffer.  How could she ever feel joy again?

There were several children put into their care who were adopted.  They were given their sacraments, education, and pensions.  One was a Senegalese boy who was turned out on the street when the royal family was arrested.  He died of starvation.

Nuns, priests, aristocrats, and working people were being beheaded in the city.  Marie Antoinette’s loyal sister-in-law and Carmelite want to be, Princess Elisabeth, who spent her time doing social work was also executed.  The King’s sister was so beloved, her servants put themselves between her and the arresting officers.

Princess Elisabeth is considered a Catholic martyr for the way she died.  She repeated the De Profundis, Psalm 129, aloud and embraced her co-condemned who was beheaded first.  Elisabeth had a supernatural calm.  She was ready.  The mob, edified by her courage, didn’t cheer when she died.

By comparison Jacques Herbert the man who forced the little prince to accuse his mother of incest was later condemned.  He became hysterical as he was put under the guillotine.  He was an atheist who called for the de Christianizing of France.

Bloodthirsty mobs were drowning farm families in the provinces because their Catholicity made them suspect as potential traitors.  Their executioners stole their animals, food, and meager possessions.  Then leaving nothing to be wasted these innocent peasant families were stripped, bound, and drowned en masse in boats which their fellow Frenchmen sunk; men, women, and children, without mercy.

To explain the painting, the Queen’s Lady in Waiting was Maria Theresa of Savoy known as Princess de Lamballe who was arrested with the family.  Italian and German, she was a devout, childless widow.  Maria Theresa wrote to Marie Antoinette, “Your friendship has been the charm of my life.”

She was taken to a door.   The door opened into a courtyard where she saw dead bodies and a large group of rough, blood-spattered men with weapons.  She gave a cry and stepped back but was pulled out.  She was struck on the head with a pike, a sharp metal infantry spear.

There were witnesses with names.  “A little lady in a white dress,” was how one participant described her.  It was said she was stripped, raped, mutilated, literally torn to pieces.

Her severed head was carried on a Pike around Paris.  People recognized who it was by her beautiful blonde hair and cried, “La Lamballe!”  One story said the mob attached her pubic hair to her chin for a beard.  Her head was taken to Madame Tussaud for a wax image then carried to Marie Antoinette’s cell for her to see.

We don’t know if Marie Antoinette saw this outrage.  Her guards told her the people brought the head of her friend and they’d bring it in for her.  She fainted.

They were like sisters both foreign-born rejects with tragic lives.  “Your friendship has been the charm of my life.”  I got to thinking about what it was like to be pulled out by a mob of sadists who had been taught to hate you without even knowing you.

We appear to be entering an era of a new revolution in America, one about collective blood revenge based on ignorance of history and the unrealistic expectations of materialism by way of Marx.  The revolution we had was about God-given rights, not man-given rights.  God-given rights were written into law for the betterment of forgetful mankind.   Radical inhumane revolution must be forced whatever the consequences as it requires calumny and genocide.

Considering the “preservative” English and American revolutions George Watson said in his masterpiece The Lost Literature of Socialism, “It is 1789, then, that unbinds revolution from its conservative chains, and the socialists were its heirs.  The sense of the word shifted lastingly from Right to Left after the Bastille fell.”

Caroline Niesley is a writer, artist and teacher of cartooning and drawing. She enjoys making sacred art and humorous drawn narratives. She is a graduate of Moore College of Art. She and her husband live in Pennsylvania.” 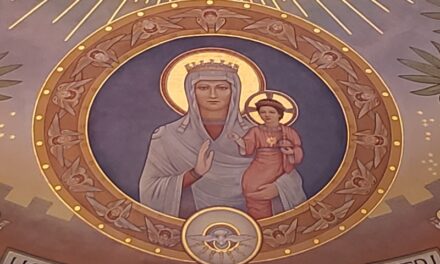