The importance of knowing the theology of the body held by the Church Fathers is revealed in a critical point made by a number of them, among them St. John Chrysostom and St. Symeon the New Theologian. Original sin, they tell us, is the result of the decision of Adam and Eve to attempt to become gods without God.

In Theology of the Body (St. Vladimir’s Seminary Press), Jean-Claude Larchet, a French Orthodox philosopher, examines the teachings of the Church Fathers on the human body. Their knowledge, their theology of the body is relevant, he writes, for our own “time and in a culture that . . . has largely lost its bearings.”

In losing our bearings we have come to treat the body as a biological entity to be managed and manipulated. Larchet’s analysis helps us see how the disputed issues and ideas in our culture that fall away from traditional Christian theology of the body are the result of our efforts to become gods without God.

This misguided attempt to make the human being a god in a godless universe is foundational to the thinking of supporters of abortion and contraception; those who seek to make normal gender confusion, same-sex marriage and-sexual acts, euthanasia, and cloning; and those who believe that sexual freedom is central to human freedom.

All of these issues and ideas in our culture are enabled, fostered, and promoted by a medical and psychological establishment—with the complicity of academic, business, political, and even religious elites—that no longer has an understanding of what it means to be a person.

Our culture is in crisis because it is busy pulling up its Christian roots and has separated the body and the soul in its worldview. The Church is in crisis because many of its members, including clergy at the highest levels, follow the ideas of the world instead of the teachings of Jesus Christ as handed down by the apostles and well-articulated by the Church Fathers. Central to this crisis is how our culture has come to define and use the human body.

While our culture is obsessed with the body, it cannot be said to love the body. In fact, the behavior of our earthbound culture suggests instead that it hates the body and sees it as a limitation. This hatred, in fact, explains abortion and what the medical establishment calls sex reassignment surgery, as well as how proponents of artificial intelligence envision future human beings as minds freed from the limitations of a body made of blood, flesh, and organs.

“No religion values the body more than traditional Christianity,” Larchet writes. This is evident in the Incarnation of Jesus Christ and in the destiny of the human body of those who enter into union with God in heaven. The bodies of those who are saved or deified, the Fathers teach, will be resurrected and transfigured along with their souls.

In examining the teachings of the Fathers, teachings based on Scripture, Larchet considers the body before the fall of Adam and Eve, the body after their fall, and the body that the deified Christian will have as a result of Our Lord’s Incarnation.

When God created Adam, the Fathers teach, he created a being that was a communion, a unity of body and soul. Each person created since then is composed of this same communion and unity. The soul is with the body at birth, and theirs is a communion that does not end with death. The soul and body, Larchet reminds us, need each other.

Larchet explains the traditional understanding of the soul, and how the Fathers distinguish between how the body is created in the image of God and in the likeness of God. The image is actual, he tells us, but the likeness is potential. We become like God and “a partaker of divine life” through our cooperation with God’s grace by freely choosing to live a virtuous life. This involves our following Our Lord’s commandments and employing ascetical practices that engage both the soul and the body.

In paradise, Adam was united to God. He did not experience the passions we experience. He did not suffer, become ill, or die. His body, unlike ours, would not decay; it was immortal. Larchet writes: “ it is significant that the Fathers think of the post-resurrection condition of the body as a reintegration of that which is enjoyed in paradise.”

Adam and Eve lost this state through sin. And we lost it through their sin. Through their sin, they, and so we became slaves to pain and pleasure, and out of this emerged our culture’s distorted understanding of sexuality.

To add to a well-known remark by St. Athanasius, God became man so that man could become god by following God’s commandments.The Incarnation of Jesus Christ opens up to us the possibility of the body’s returning to the state it lost through the sin of Adam and Eve. Unlike other religions, the Incarnation, Larchet writes, “accords most importance and value to the body, destining it for the highest of callings.”

Without this understanding of the theology of the body as articulated by the Church Fathers, and presented so clearly and concisely by Larchet, we remain lost. 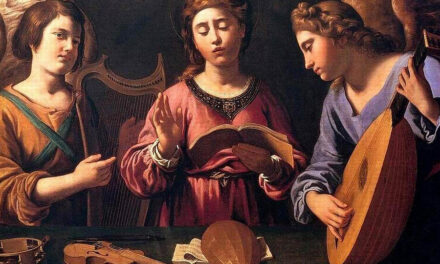